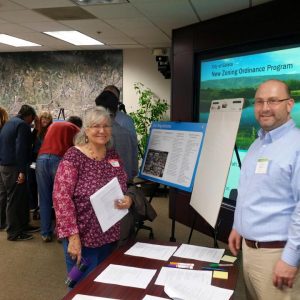 The City of Goleta has released a Draft Zoning Ordinance, draft Zoning and Overlay District maps, and supporting materials for public review and consideration. Outreach activities on the draft are underway and the public is invited to attend any or all of the workshops and open houses to provide feedback.

A Zoning Ordinance consists of written regulations and laws that define how property in specific geographic zones can be used. These ordinances specify whether zones can be used for residential or commercial purposes, and may also regulate lot size, placement, bulk (or density) and the height of structures. Zoning ordinances are lengthy documents describing not only the acceptable use for specified areas of land, but also the procedures for handling infractions (including any penalties), granting variances and hearing appeals.

When the City of Goleta was incorporated in 2002 it adopted the County of Santa Barbara’s Zoning Ordinance and Zoning Map. In 2006 the City adopted the General Plan (GP)/Coastal Land Use Plan (GLUP). The new Zoning Ordinance is being prepared in order to reflect the new standards of and implement the GP/CLUP and provide continuity (where appropriate) with the present zoning code.

All meetings will be held in City Council Chambers at 130 Cremona Drive, Suite B, Goleta, CA 93117.

For questions or comments, please contact Anne Wells, Advance Planning Manager  at awells@cityofgoleta.org or 961-7500, or visit www.GoletaZoning.com for more information and to access project documents.