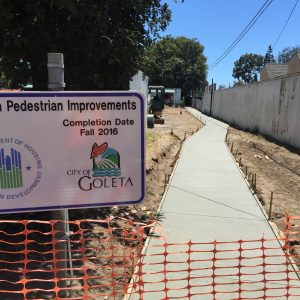 The City is hard at work on Capital Improvement Projects, with a number of projects slated for this summer. We are looking forward to having these new and/or updated amenities available to you. Thank you for your patience during construction.

Evergreen Tennis Courts
Tennis players can rejoice because construction on the Evergreen Park Tennis Courts will be completed at the beginning of this month. Crews have worked hard to repair and resurface the courts, and tennis players will be very pleased with the outcome. Please join us for the re-opening event on August 10th at 10 a.m. (7500 Evergreen Dr.).

Path Lighting at Boys & Girls Club and Goleta Valley Community Center Project
In order to improve pedestrian safety, a number of upgrades are being made to the pathway between the Goleta Valley Community Center and the Boys & Girls Club. Existing fencing along the front and back parking lots has been removed and path lighting will be installed from Hollister Avenue to the back of the property where the Boys & Girls Club facility is located. The contractor has replaced the front half of the sidewalk with a new concrete sidewalk and will be making additional minor repairs around the trees. In addition, a drainage swale (a vegetated ditch with native grasses to convey storm water runoff that allows some infiltration of that water into the ground) will be installed between the path and parking areas. The project began in mid-July and construction is expected to take about two months.

Maria Ygnacio Creek Bike Path Lighting
Cyclists can look forward to a brighter path. While the County of Santa Barbara has installed lighting along the portion of the Maria Ygnacio Bike Trail located within the County limits, the trail remains unlit along the segment passing through the City of Goleta. The project will install 12 independent solar powered LED lighting fixtures along this 1,750 foot unlit portion from Hollister Avenue to the trail bridge that crosses the Maria Ygnacio Creek. These improvements will dramatically enhance the safety of commuters using the bike path during dark hours. Work will begin in August and take approximately two months to complete.

Hollister Avenue High Intensity Activated Crosswalk (HAWK)
Another safety improvement project the City is working on is the Hollister Avenue High Intensity Activated Crosswalk (HAWK) Project. A HAWK system (a pedestrian activated lighted crosswalk) will be installed in front of the Goleta Valley Community Center replacing the existing yellow flashing beacons. Additional enhancements to the crosswalk include replacing striping and signage, adding lighting and relocating the crosswalk approximately 100 feet to the east, to be located between the eastbound and westbound bus stops. This project is slated to begin in late August and conclude in October.

Hollister Avenue Crosswalk Enhancements at Orange Avenue
In an effort to provide an additional visual cue to alert motorists when a pedestrian is crossing the street, new pedestrian activated Rectangular Rapid Flashing Beacons (RRFBs) will be installed over travel lanes on Hollister Avenue at Orange Avenue. The project also includes new striping and signage, as well as sidewalk improvements. Work is scheduled to begin in late August and conclude in October.