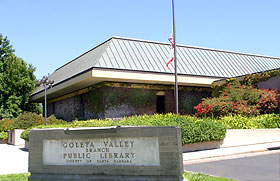 For several years, the City of Goleta has evaluated various options to address the significant imbalance between revenues and expenditures at the Goleta Library, which has been operating with a deficit for some time, as are many libraries throughout the County. Reserves are quickly depleting and are likely to be fully expended in the next two years without significant changes to the operation. Currently, the library is operated by the City of Santa Barbara under operating agreements with both the City of Goleta and the County of Santa Barbara.

On July 19th, the City Council received an update from staff regarding options to reduce deficit spending, from increasing the City’s contribution to reducing operating hours. The City Council opposed closing the library on Mondays, which the City of Santa Barbara indicated was necessary because of limited staffing levels. The Council also opposed closing one hour early on Tuesdays, Wednesdays or Thursdays.

Instead the Council authorized an additional $42,000 contribution to help fund the vacant children’s librarian position and the continued use of reserves to cover the operating deficit.  Council further directed that City staff initiate negotiations with both the City and County of Santa Barbara to transfer the responsibility for library operations to the City of Goleta, maintaining service to the broader Goleta Valley as a County library branch.

Goleta staff will work closely with the City of Santa Barbara to stave off any reduction in operating hours while a transition to City control is pursued. For more information regarding the Goleta library, please contact Deputy City Manager Kathleen Trepa at ktrepa@cityofgoleta.org.