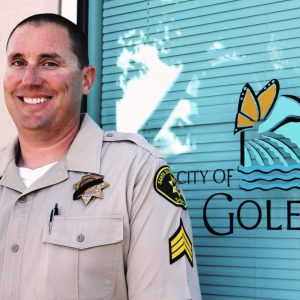 Lieutenant Kevin Huddle, an 18-year veteran of the Sheriff’s Office will be taking over as Chief of Police Services for the City of Goleta. Born and raised in Santa Barbara, Lieutenant Huddle knew from the age of four that he wanted a career in law enforcement.  In fact, he told his preschool teacher exactly that.  After graduating from Santa Barbara High School, Lieutenant Huddle studied Criminal Administration and Justice at City College.   He then went on to graduate from California State Long Beach with a B.S. degree in Criminal Justice.

After college, Lieutenant Huddle returned to Santa Barbara where he was hired by the Sheriff’s Department in 1998 as a deputy.   During that time he spent two years as a patrol officer in Goleta, and four years at Isla Vista Patrol, where he was promoted to detective.  He continued to rise in the ranks, being promoted to Sergeant in 2007.  In 2008 he became the supervisor of the Goleta Police Department Traffic Motor Unit, where he served for six years.  He has spent the past two years working as a supervisor in the Santa Barbara Sheriff’s Department Criminal Investigation Division. He was recently promoted to Lieutenant.

A natural leader, Lieutenant Huddle looks forward to supervising the Goleta patrol, and he is ready to address the unique needs of the close-knit Goleta community.

He and his wife and two children live in the Santa Ynez Valley.