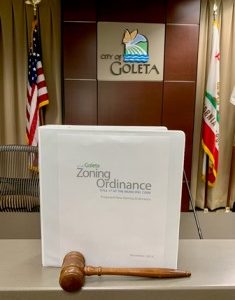 After hundreds of hours of planning work and more than 20 public meetings and open houses in 2019 alone, the draft New Zoning Ordinance (NZO) will go before the Goleta City Council for discussion on November 5, 2019.  The City Council will be asked to consider the Planning Commission’s recommendations in the draft NZO.  The focus of the staff presentation will be on key issue areas, but any topic will be open for discussion.  Key topics will include:

During the November 5 meeting, Council will have an opportunity to receive public input on the NZO, and give policy direction concerning any needed changes to the document. Continued discussion on the NZO and possible adoption will occur on December 3, 2019.

The NZO will revise citywide zoning regulations to implement the General Plan, update development and design standards and permitting procedures, and help realize the community’s vision for the future – a safe, beautiful, vibrant and livable community with a robust local economy and a sustainable relationship with the environment.  The NZO translates Goleta’s General Plan into specific regulations defining allowable land uses within the City, provides a basis for reviewing applications for new construction as well as alterations and additions to existing buildings and adds clarity and transparency to the development review process.

Mayor Paula Perotte wants Goleta residents to know what they are getting out of this process. She said, “The new code will clear up ambiguities and provide more useful detail than exists in the current code. The clarity and detail of the new code will promote consistency in how we deal with “like” situations, consistency in how residents and businesses are treated. We all want to be treated fairly and that starts with equal treatment in “like” situations.  The new code will increase opportunities for people to learn when a project is coming forward, increase the instances when decisions must be made in public and in every instance provide the opportunity to appeal in a public setting.”

City of Goleta Planning and Environmental Review Director Peter Imhof said, “Getting the draft New Zoning Ordinance to this point represents an extraordinary amount of work over an extended period time – by the Planning Commission, City staff and, not least, engaged City residents.  I look forward to public input and City Council feedback on the draft and before too long, we hope, to final adoption of the City’s own Zoning Ordinance.”

Goleta’s current Zoning Ordinance was inherited from Santa Barbara County upon incorporation in 2002. As a result, it does not reflect the City’s land use vision as described in the General Plan which was adopted on October 6, 2006.  In 2013, the City Council authorized staff to prepare new zoning regulations and a zoning map that would be consistent with the General Plan.  A Public Review Draft was released on November 19, 2015.  Over the course of eight public workshops starting in January of 2016, several open houses, and line-by-line input based on public input received during the 2015-2016 outreach process, a Revised Draft NZO was released to the public in January 2019.  During the spring of this year, the City hosted an additional nine planning commission workshops, six open houses and one joint City Council/Planning meeting, before conducting three Planning Commission hearings earlier this fall to consider the revised draft.

To review the Staff Report and the New Zoning Ordinance Draft in its entirety click here.

The November 5, City Council meeting will begin at 5:30 p.m. at Goleta Council Chambers located at 130 Cremona Street, Suite B.  If you are not able to attend in person, you can watch the meeting on Channel 19 or on our website at https://tinyurl.com/GoletaMeetings.

City staff are available to meet with anyone who has any questions or wants more information on the NZO. Please call (805) 961-7557 and leave your contact information. City staff will contact you to schedule a meeting.

For more information go to www.goletazoning.com where you can also post and review public comments.