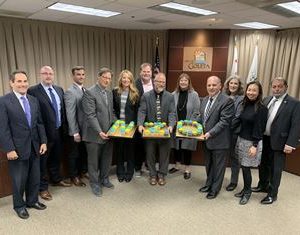 February 18, 2020, was a historic night for the City of Goleta. The City Council voted to adopt on first reading the New Zoning Ordinance (NZO). Council, staff, and community members celebrated this milestone during a break in the City Council meeting with cupcakes and sparkling cider served in celebratory champagne flutes. This momentous decision came after hundreds of hours of planning work, more than 20 public meetings and open houses in 2019 alone, and direction from the Planning Commission and City Council.

Mayor Paula Perotte said, “Thanks to the unprecedented high level of public involvement and input, the Goleta Zoning Ordinance tailors the code inherited from Santa Barbara County to Goleta’s needs. Goleta residents, staff, and people who work and play here will gain great benefits from the new Ordinance’s greater predictability, consistency, and clarity.”

City Manager Michelle Greene added, “Completion of the New Zoning Ordinance is a significant milestone for the City. It represents the culmination of many years of effort and countless hours of hard work from our City Council, Planning Commission, City staff and many dedicated residents. It is an exciting achievement for our young city, which establishes a strong framework for the future which reflects the values of the Goleta community.”

Peter Imhof, Director of Planning and Environmental Review, said, “Years of work have paid off and Goleta’s New Zoning Ordinance is finally here. We are tremendously grateful for all who participated in this process. The final product is the result of a true collaboration over a long period by many people.”

Anne Wells, Advance Planning Manager, said “The City Council, Planning Commission, community members, and staff worked long hours over the course of 5 years and 75 public meetings to develop and refine Goleta’s first, independent zoning ordinance. We are on the brink of General Plan-consistent land use regulations that reflect the desire and needs of our community. Once adopted, the regulations, Title 17 of the Goleta Municipal Code, will be available to the public in an online platform and is a welcome step into the 21st Century – a milestone initiative that will affect every land use and development decision the city makes. This is an exciting time for Goleta!”

The New Zoning Ordinance will replace the City’s existing zoning regulations in their entirety. The NZO provides rules and regulations for land use and development on private property. The purpose of the New Zoning Ordinance is to implement the General Plan, and to protect and promote the public health, safety, peace, comfort, convenience, prosperity, and general welfare.

Background:
Goleta’s current Zoning Ordinance was inherited from Santa Barbara County upon incorporation in 2002. As a result, it does not reflect the City’s land use vision as described in the General Plan which was adopted on October 6, 2006.  In 2013, the City Council authorized staff to prepare new zoning regulations and a zoning map that would be consistent with the General Plan.  A Public Review Draft was released on November 19, 2015.  Over the course of eight public workshops starting in January of 2016, several open houses, and line-by-line input based on public input received during the 2015-2016 outreach process, a Revised Draft NZO was released to the public in January 2019.  During the spring of this year, the City hosted an additional nine planning commission workshops, six open houses and one joint City Council/Planning meeting, before conducting three Planning Commission hearings earlier this fall to consider the revised draft.

Information on the New Zoning Ordinance is available at www.goletazoning.com.