Goleta’s 9th annual State of the City will be held Thursday, May 5th at Bacara Resort and Spa. The event will feature presentations by Mayor Jim Farr and City Manager Michelle Greene.  Register at www.goletachamber.com.  This event is co-sponsored by the City of Goleta and the Goleta Valley Chamber of Commerce.

The event will be rebroadcast on Goleta TV (channel 19/104.148) and Cox Channel 8 and will also be posted on the City’s website at www.cityofgoleta.org.  Broadcast schedule will be posted closer to the event. 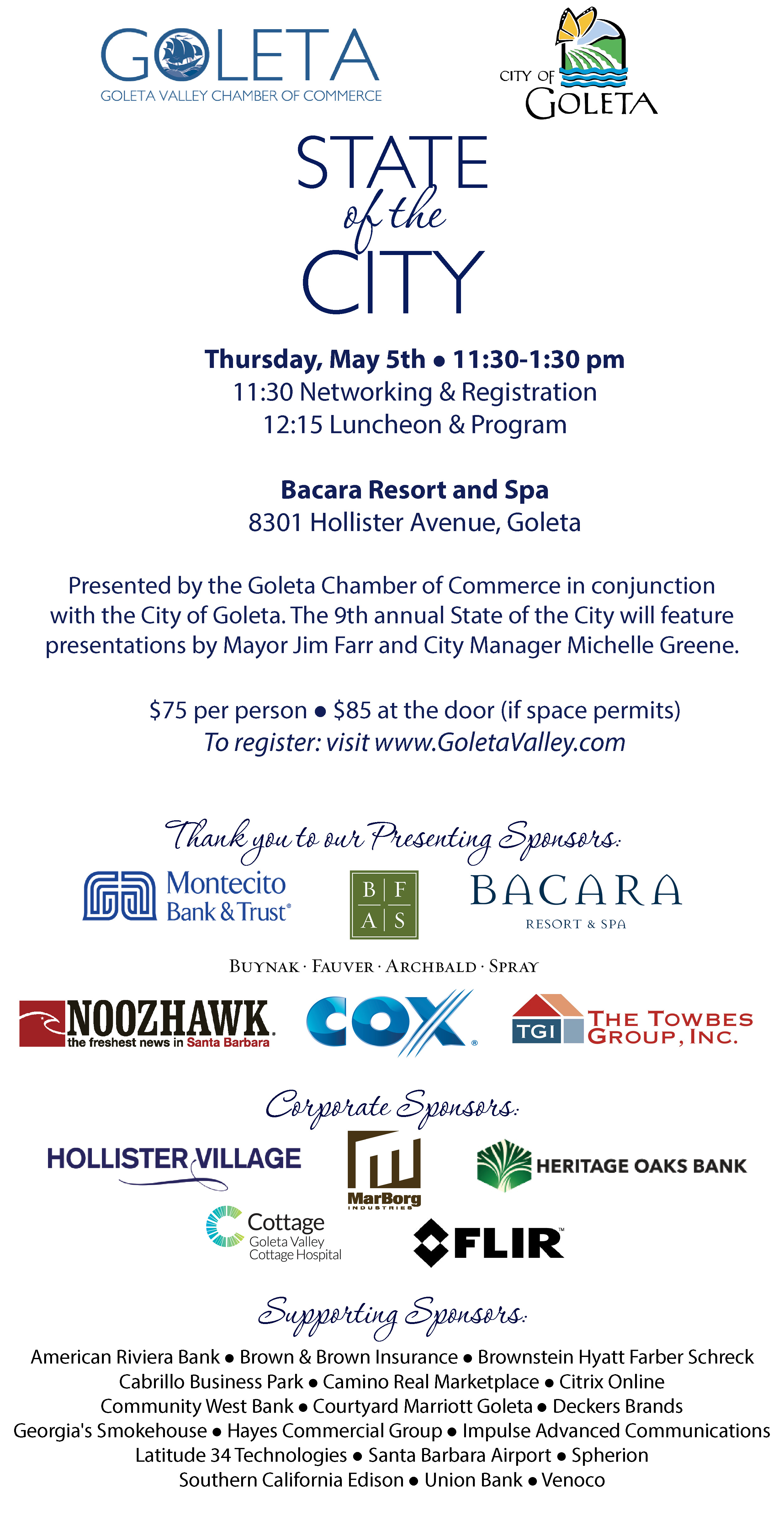 The Santa Barbara Metropolitan Transit District (MTD) is proposing changes to its routes and schedules in Goleta and is seeking your feedback.  The MTD Board of Directors will approve a final service plan for next year in May, and the changes would take effect on August 22, 2016.

Detailed information about the proposed changes, as well as a complete listing of upcoming Community Meetings being held over the next few weeks can be found here.

Please attend a meeting, or send your mailed or emailed comments about the proposals to MTD no later than April 21st to:

At the April 19th City Council meeting, the Council will be considering awarding bids for three exciting Capital Improvement Projects that are slated to get underway in the coming months. Here’s an overview of these projects which will benefit our community:

As many tennis players know, the tennis courts at Evergreen Park have been closed and unusable to the public for quite some time. After exploring many repair options, plans have been approved to remove the existing asphalt concrete surface and resurface both tennis courts.  The project is expected to begin construction in mid-May and last approximately two months.

In order to improve pedestrian safety, a number of upgrades will be made to the pathway between the Goleta Valley Community Center and the Boys & Girls Club and the parking areas. The project will remove existing fencing along the parking lots and install path lighting from Hollister Avenue to the back of the property where the Boys & Girls Club facility is located. The project will also include repairing the parking lot asphalt and making minor repairs to the path itself.  It is anticipated that this project will begin construction in mid-May and last approximately two months.

Cyclists can look forward to a brighter path. While the County of Santa Barbara has installed lighting along the portion of the Maria Ygnacio Bike Trail located within the County limits, the trail remains unlit along the segment passing through the City of Goleta. The project will install solar powered LED lighting along this 1,750 foot unlit portion from Hollister Avenue to the trail bridge that crosses the Maria Ygnacio Creek.  These improvements will dramatically enhance the safety of commuters using the bike path during dark hours.  Construction is expected to begin in June and last two weeks. 4/5/16 Update – this item has been moved to the May 3rd City Council agenda.

Learn more about these projects and many others on our website here.

Lieutenant Kevin Huddle, an 18-year veteran of the Sheriff’s Office will be taking over as Chief of Police Services for the City of Goleta. Born and raised in Santa Barbara, Lieutenant Huddle knew from the age of four that he wanted a career in law enforcement.  In fact, he told his preschool teacher exactly that.  After graduating from Santa Barbara High School, Lieutenant Huddle studied Criminal Administration and Justice at City College.   He then went on to graduate from California State Long Beach with a B.S. degree in Criminal Justice.

After college, Lieutenant Huddle returned to Santa Barbara where he was hired by the Sheriff’s Department in 1998 as a deputy.   During that time he spent two years as a patrol officer in Goleta, and four years at Isla Vista Patrol, where he was promoted to detective.  He continued to rise in the ranks, being promoted to Sergeant in 2007.  In 2008 he became the supervisor of the Goleta Police Department Traffic Motor Unit, where he served for six years.  He has spent the past two years working as a supervisor in the Santa Barbara Sheriff’s Department Criminal Investigation Division. He was recently promoted to Lieutenant.

A natural leader, Lieutenant Huddle looks forward to supervising the Goleta patrol, and he is ready to address the unique needs of the close-knit Goleta community.

He and his wife and two children live in the Santa Ynez Valley.

National Library Week (April 10 – 16, 2016) is a time to celebrate the contributions of our nation’s libraries and library workers, and to promote library use and support. From free access to books and online resources for families to library business centers that help support entrepreneurship and retraining, libraries offer opportunity to all. The theme for 2016 National Library Week is “Libraries Transform.”

Come on down to the Goleta Library to kick-off this special week on Saturday, April 9. The library will be hosting an afternoon of games, crafts, and fun from 2:00 p.m. – 3:30 p.m. in the Multipurpose Room for children ages 3-11.  For more information, contact the Goleta Library at 805-964-7878 or click here.

In addition to this celebration, the library sponsors a number of monthly programs for all ages. Join the Knitting and Crocheting Group or the Adult Coloring Book Club, take part in a Bilingual Storytime or Lego-building activity. Check out the calendar and get to know your local library.  It’s free to the public and open seven days a week!

The City is asking for your help in registering your vacation rental.  The Goleta City Council passed a short-term rental ordinance last year in order to protect and preserve the residential character of neighborhoods where vacation rentals operate. Some of the goals behind the adoption of the ordinance were to provide the City and law enforcement better tools to properly regulate these uses as well as create a registry that could track where and how many of these uses have been permitted.  The ordinance also provides a mechanism for people to object to a permit before and after it has been issued.

The City’s Vacation Rental Ordinance requires that all applicants do the following:

Last year the City Council asked staff to secure an amortization study on the Ellwood Onshore Facility (EOF) operated by Venoco.  A team of oil and gas experts, Baker and O’Brien, was hired to analyze how long the EOF would need to operate before the company recovers an adequate return on its investment in the facility.  The study is now complete and available on the City’s website here.

Although the facility was approved by the County in 1964, the zoning is not consistent with the City’s current zoning and land use designations.  It is operating as a legal, non-conforming use.  The City’s long-term policy goal is to end oil and gas processing in the City.  The courts have held that before a city can terminate a legal non-conforming use like the EOF, it must provide the property owner an opportunity to recover an adequate return on its investment.

Venoco recently filed for reorganization in bankruptcy.  In light of that filing, the City’s options are currently under the jurisdiction of the bankruptcy court.  Any action the City might take with the information in the amortization study is on hold.

Your input is crucial to creating a more resilient community! The City of Goleta is currently working with the County of Santa Barbara to update the Santa Barbara County Multi-Jurisdiction Hazard Mitigation Plan. This is a countywide plan that identifies risks and ways to minimize damage from natural and manmade disasters. The Plan is a comprehensive resource document that serves to enhance public awareness, create a decision-making tool for policy makers, promote compliance with State and Federal program requirements, enhance local policies for risk reduction capabilities, and provide coordination between the City and the County. The Federal Disaster Mitigation Act of 2000 requires all local governments to create such a disaster plan in order to qualify for federal mitigation funding in the future.

The current 2011 Multi-Jurisdiction Hazard Mitigation Plan, including the City of Goleta Annex, may be downloaded from www.countyofsb.org/ceo/oem After five years the Plan is in need of revision. Many of the mitigation actions outlined in the Plan have been completed while others have been deferred due to issues beyond our control. The City of Goleta is working with the County on the Plan Update through its participation on the Mitigation Advisory Committee (MAC). The MAC is comprised of representatives from each of the incorporated cities within Santa Barbara County. The City of Goleta is updating its own mitigation strategies and reviewing the hazards that could impact the City, in order to better coordinate with the County and improve the City’s capabilities to respond to and recover from natural and man-made disasters.

We need public input regarding the threats facing our region and actions we can take to reduce the impact of future hazard events. Specifically, we are looking for input on the following kinds of questions:

The second phase of the traffic improvements on northbound Storke Road will begin on this evening, Wednesday, March 2.  During this phase, the following improvements will be made:

Please use the southbound Los Carneros onramp while these changes are being constructed.

Some lane closures and turn lane restrictions will be in place at various times during this project.

The work will take place during the month of March primarily during the evening hours.  Of course if the March miracle of heavy rain occurs, the work will push into April.

Work is set to begin this evening at the southeast corner of the intersection with the installation of a push button for bicyclists.

The project is being completed in conjunction with Caltrans.

The University of California, Santa Barbara has completed a Project Draft of the Initial Study/Mitigated Negative Declaration (IS/MND) for the proposed North Campus Open Space Restoration Project. The IS/MND is now available for public review and comment and can be downloaded here.