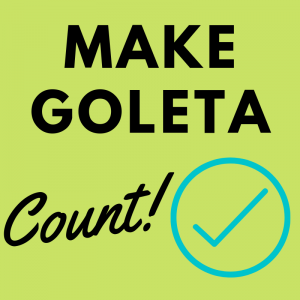 The results from the 2020 Census have been released.

The data represents where people were living as of April 1, 2020. Below are a few key highlights for the City of Goleta:

A more detailed breakdown for the City can be found here.

Every 10 years the U.S. Census Bureau conducts a once-per-decade count of the nation’s population. The Census is a U.S. Constitutional requirement of the federal government used to allot the number of congressional representatives for each state, to redraw the boundaries of legislative districts within a state, and to determine federal funding to support community services. A look into the 2020 Census count results released to the Santa Barbara County Association of Governments (SBCAG) Board of Directors shows that the region is growing slower than the statewide average, housing production continues to not keep up with existing population and growth, an increase in the countywide proportion of the Hispanic/Latino population, and North County continues to gain in its share of the region’s population, 54 percent in 2020 compared to 52 percent in 2010. The Summary Report contains a variety of interesting and useful data points relevant to the Santa Barbara County region which is available for the public to download and read at sbcag.org/news.

The 2020 Census Summary Report is prepared by SBCAG as the State Census Data Affiliate Center in Santa Barbara County. “Information from the 2020 Census helps decision makers better understand the region’s population, how to plan for housing, jobs, schools, and to know how much state and federal funding the region will receive for essential community services,” said Marjie Kirn, executive director of SBCAG.

The 2020 Census report is based on information contained in the release of the Census Redistricting File – an early product from the U.S. Census Bureau of results from the 2020 Census count. The data is limited and specific to population for cities and unincorporate areas, housing units and Race and Hispanic Origin. In September, the U.S. Census Bureau released the Redistricting File in an easier-to-use format for the public, now available on data.census.gov.

Important highlights from the latest summary report include:

SBCAG’s summary report of the redistricting file is a portion of the 2020 census data expected to be released over the next few years by the U.S. Census Bureau. The Demographic and Housing Characteristics file is expected to be released in 2022. Additionally, a detailed American Community Survey is expected in December 2021 by the U.S. Census Bureau that includes data on age, gender, income, and household relationship. Urban area delineations and population counts will be released in 2023. SBCAG will continue to present information as it becomes available.