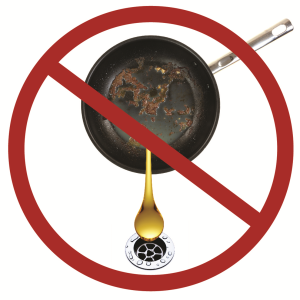 FOG, or Fats, Oils, and Grease that go down your drain can cause major problems for homeowners and the Goleta West Sanitary District (GWSD). GWSD wants to remind everyone to keep the FOG out of home and commercial pipes and the community’s waste stream.

Fats, oils, and greases are a byproduct of cooking and are found in such things as meat fats, cooking oil, lard and shortening, butter and margarine. When grease is washed down the drain, it sticks to the inside of sewer pipes (both on your property and in the streets.) Over time, it builds up and can block an entire pipe.

Garbage disposals do not keep grease out of the pipes, they only shred it into smaller pieces. Commercial additives, including detergents that claim to dissolve grease, may pass it down the line and cause problems away from the source. But the results of a grease-blocked sewer pipe can be sewage overflows in your home or neighborhood resulting in expensive and unpleasant cleanups; possible exposure with disease-causing organisms; or an increase in maintenance costs at GWSD.

How to dispose of your FOG: