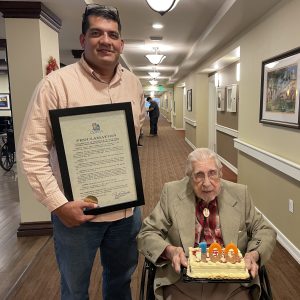 Each birthday is a blessing and more so if you are a centenarian. Local Goleta resident Ron Gaston was the “man of the day” recently at Mariposa at Ellwood Shores, the Westmont Living senior living community where he has been living since July. As a young man, Gaston was fascinated with engineering. He studied to become an Aircraft Design Engineer and worked for Lockheed for 55 years, both in England and the United States. Since his retirement, he has loved to work with clocks and has even built a grandfather clock. He is married and has one daughter Diane.

According to Peter Bonilla, executive director, Mariposa at Ellwood Shores, “Ron is a joy to be around every day, and his contagious smile and wisdom keep his friends on their toes. He is well-liked by residents and staff alike. We are very thankful for the honor bestowed on him by the City of Goleta and on behalf of Mayor Paula Perotte.”