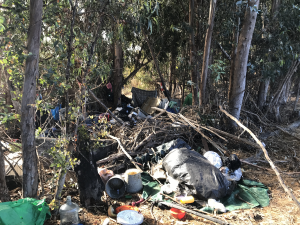 The City of Goleta is pleased to have officially begun our partnership with CityNet this week to achieve our collective goal of finding housing for at least 50 homeless individuals in Goleta by summer 2022. On August 17, 2021, the Goleta City Council approved a $530,565 contract for homelessness services to CityNet, a non-profit organization, to provide outreach, bridge housing, and housing navigation.

Additionally, as fire season progresses, many Goleta residents have expressed concerns that people camping illegally alongside the Union Pacific Railroad tracks and Highway 101 pose a severe fire threat to the encampment residents and the community. This threat was documented by the County Fire Marshall in December of 2020, and the City of Goleta has been working with the County of Santa Barbara, CalTrans, Union Pacific Railroad, and the Sheriff’s Office to try to relocate those living in encampments. These efforts have already been partially successful as approximately 10 people have relocated from their encampments to either permanent housing or to Hedges House of Hope, the new shelter for homeless individuals in Isla Vista recently purchased by the County of Santa Barbara.

However, there are many more homeless people living on the streets and in encampments in the Goleta area who need help connecting with services and housing. CityNet’s efforts in conducting outreach to the homeless, connecting them to area service providers, providing both immediate shelter and bridge housing, and case management to help ensure ongoing success has already proven to be effective. The group has been working with the City of Santa Barbara and the County of Santa Barbara on similar efforts with great success.

City of Goleta Mayor Paula Perotte said, “By providing temporary, safe shelter, this initiative will provide increased safety for the homeless. And by reducing urban encampments we will be reducing the risk of fires for the entire community.”

The new effort by CityNet will implement significant portions of the City of Goleta’s Homelessness Strategic Plan adopted by the City Council on April 20, 2021. CityNet’s provision of services will run through June 30, 2022, and includes the following activities:

“We are bringing the best evidence-based practices for ending homelessness to the City of Goleta,” said Interim Director of Neighborhood Services, Jaime Valdez, “The use of five motel rooms on a continual basis means that homeless individuals will have an incentive to get off the streets and begin their journey into permanent housing.”