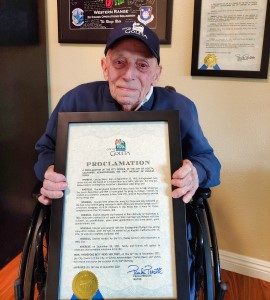 Each birthday is a blessing and more so if you are a centenarian. Local WWII Veteran Lt. Charles Dever celebrated his 106th birthday by being honored in two ways. First, the City of Goleta wrote a proclamation in his honor, and, second, he was part of a group of seniors who went on a field trip hosted by Dream Flights, a non-profit established and dedicated to honoring seniors and the United States military veterans. Their mission: “Giving Back to Those Who Gave”. Dever and the other veterans enjoyed conversing with the pilots and seeing the planes up-close. He was especially thankful for the honor bestowed on him by the City of Goleta and on behalf of Mayor Paula Perotte.

Born on September 20, 1915, in Englewood, New Jersey, Charles Dever was the fourth of 5 children born to a Tailor. Dever, the only son, helped deliver clothing from his father’s downtown tailor shop. He played football and was a track star in high school but the Great Depression and WW II interrupted his going to college. Instead, he worked at a cosmetics company in New York City, until he was called to service by the Army. He then joined the Army Air Corps was stationed on the east coast before going overseas to North Africa and Western Europe as a Navigator on B-24 airplanes who completed more than 50 missions. Dever was honored with the Distinguished Flying Cross among many other medals. After the war, he moved to Los Angeles, with his wife, to work at a cosmetics company. The couple had two children. In the early 1960s, he went to work for the U.S. Postal Service until he retired in 1980. After retirement, he continued to live in the family home in Fullerton, until July 2019 when he moved into the Mariposa at Ellwood Shores to be closer to his family in Santa Barbara.

Pictured: Lt. Charles Dever shows off his City of Goleta proclamation for his 106-year birthday.