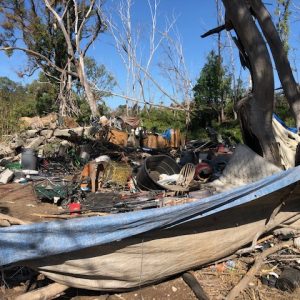 The City of Goleta coordinated a multi-agency effort in September to clean-up homeless encampments, trash, and debris found within the Union Pacific Railroad (UPRR) owned rail corridor. The rail corridor goes through Goleta City limits, spanning just west of the Cathedral Oaks Overpass to Patterson Avenue. Over the four day operation, more than 12 roll off dumpsters full of debris were removed.

The clean-up efforts are consistent with the goals to reduce fatalities, safety hazards and future fires from occurring in and around the railway corridor going through Goleta, as found in the recent Santa Barbara County Grand Jury Report on Railway Safety. This is accomplished by closely working with property owner Union Pacific Railroad and allied agencies including: UPRR Police, Caltrans, California Highway Patrol, Goleta Police Department/Santa Barbara County Sheriff’s Office, MarBorg Industries, Homeless Services within the Santa Barbara County Department of Behavioral Wellness, and the City of Goleta’s Public Works Department.

Representatives from Santa Barbara County Behavior Wellness were present during the clean-up effort to offer shelter and services to homeless individuals they came into contact with. The City is working on our first ever Homeless Strategic Plan which will be finalized by next summer. We will be reaching out to the community for input, so stay tuned.