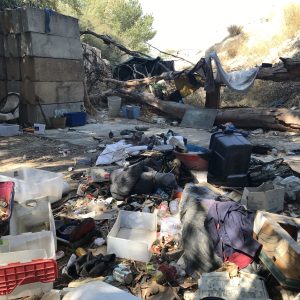 The City of Goleta is proactively addressing homelessness. In April 2021, the Goleta City Council formally adopted the City’s first Homelessness Strategic Plan. To kick-off implementation of this Plan, the City Council recently allocated over $550,000 with the goal of getting 50 people out of hazardous encampments and into housing.  To facilitate this effort, the City is working with the Santa Barbara Alliance for Community Transformation (SB ACT), a local nonprofit guiding homelessness strategic efforts, and CityNet, a statewide leader in homeless outreach and housing placement. Together, these organizations will work to address street-level homelessness through outreach, case management, housing navigation, and more. The primary goal is to relocate people from dangerous fire-prone encampment areas and sensitive habitat areas into permanent housing. The CityNet contract includes ongoing reservation of five hotel rooms for bridge housing while more permanent accommodations are found.

“I have been personally working on this issue for many years,” noted City of Goleta Mayor Paula Perotte, “For the first time, we have a significant amount of new federal funding that gives us the financial resources to make a real difference in the mission of getting people off the streets and into more stable, permanent housing. This funding, along with a significant contribution from the City’s General Fund, allows us to bring on organizations like SB ACT and CityNet which, along with the Santa Barbara County Sheriff’s Office, and the County’s Department of Behavioral Wellness, gives us a real chance to make a difference.”

The City’s Neighborhood Services Department prepared the Homelessness Strategic Plan and is working closely with the Parks and Open Space Manager George Thomson of the Public Works Department and Community Resource Deputy Ben Sandu of the Sheriff’s Office to address encampments.

“We are taking advantage of City investments in transitional housing at PATH and the Hedges House of Hope in Isla Vista,” remarked Jaime Valdez, Interim Director of Neighborhood Services, “People living in encampments along the railroad tracks and highway are not just endangering themselves, but the community when they have open fires and have nowhere to go to the bathroom or shower.”

During the past several months, the City addressed numerous encampments at Ellwood Mesa, the public open space that includes the Monarch Butterfly Grove, Ellwood Beach, and acres of sensitive habitat.  Five encampment residents at Ellwood Mesa were relocated to transitional housing at the Hedges House of Hope and over 4,500 pounds of trash from eight separate abandoned encampments was removed.

George Thomson, City Parks and Open Space Manager notes, “Reporting encampments to the City is the first step to ensure encampment residents transition to permanent housing.  With the help of the community reporting encampments, the impacts to residents and the environment can be minimized.”

Each week, SB ACT coordinates a team of stakeholders that includes City staff, Mayor Perotte, and representatives of CityNet, County Behavioral Wellness, CalTrans, Union Pacific Railroad, the South Coast Chamber of Commerce, and others to discuss specific steps to moving people off the streets. In the past month, the collaboration has already been responsible for relocating four people out of encampments and into more stable housing. Once encampment residents have been housed, the City works with Caltrans and UPRR to clean-up and clear the area of all trash and waste.

Mayor Perotte said, “This is only the first step of our comprehensive strategy to address homelessness here.  I’m sure that we will learn a lot and we will build upon our successes.”