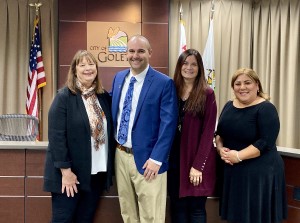 The City of Goleta is proud to celebrate and recognize our Goleta City Clerk Division during the 52nd anniversary of Municipal Clerks Week which runs from May 2nd through May 8th.  Tonight, May 4, 2021, the Goleta City Council will issue a Proclamation to honor the City’s talented, dedicated, and hard-working City Clerk Division. If you want to brighten their day and let them know what a great job they are doing, send an email to CityClerkGroup@cityofgoleta.org.

Goleta’s small but mighty City Clerk Team includes 18-year employee City Clerk Deborah Lopez, who has been with the City almost since its beginning in 2003, as well as Deputy City Clerks Liana Campos and David Cutaia.

Mayor Paula Perotte said this team is the glue that holds the City together.  She said, “The Clerk’s Office serves as the information center, providing a vital link between our residents, local governing bodies and agencies of government at all levels!  You could say this office is our central nervous system.  They are central to our city……but never nervous.  On behalf of our City Council and residents, I am extending our heartfelt thanks to them for their dedication to the Goleta community and our City Council and staff.”

City Clerk Deborah Lopez said she is honored to be Goleta’s City Clerk.  She said, “I love my job and because of that it doesn’t feel like a job but rather a journey. I am lucky to work with two amazing staff members, Liana Campos and David Cutaia, who have a work ethic I admire. I was so impressed with how our small team maintained the high level of performance we pride ourselves on, while accepting even more responsibility with virtual meetings due to the pandemic. Since we began virtual meetings for City Council, Commissions and Committees in March 2020, we have held over 200!”

The City Clerk Division serves as the information center on functions of local government and provides a professional link between community members, local governing bodies, and agencies of government at all levels. The Division is also the Historian of the Records, taking care of the entire recorded history of the City.

The City Clerk Division has many duties and responsibilities, including attending all City Council meetings and maintaining a record of the proceedings, ordinances, resolutions, written contracts, and official bonds; serving as the election official for the City of Goleta; overseeing Boards, Commissions and Committees; and much more. Learn more about the City Clerk Division at www.cityofgoleta.org/city-hall/city-clerk.

We commend them for their courage, flexibility, resilience, and dedication year-round, as well as their ability to pivot during this ongoing pandemic to provide virtual meetings to the public and run a virtual election in November 2020.