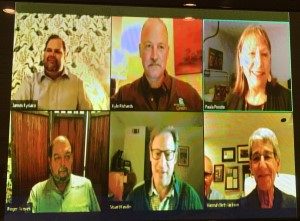 Senator Hannah-Beth Jackson may have left office, but her lasting impact on the City of Goleta remains. Before her last day in office on November 30, the City had the opportunity to say thank you. At the November 17 Goleta City Council meeting, the City honored Senator Hannah-Beth Jackson with a proclamation acknowledging her distinguished career and dedication to the City’s beloved Ellwood Mesa. The City recognized Senator Jackson for her many contributions, inspired leadership, and unwavering dedication to preserving the Ellwood Mesa as a living legacy for the residents of Goleta and visitors from around the world.

Senator Jackson said, “It has been an honor to represent the City of Goleta and its enduring natural treasures, including the Ellwood Mesa Butterfly Grove, in the California Legislature. I have long admired the magnificent monarch butterfly, so I was proud to help secure critical funding to restore such an important monarch habitat in our state. I am grateful and humbled by the recognition of my efforts to preserve this beloved community landmark for generations to come.”

Mayor Paula Perotte was grateful to have the opportunity to show the City’s appreciation. She noted that “helping Goleta preserve Ellwood Mesa is just one of many ways Senator Jackson has represented the City of Goleta. From capping derelict oil wells to securing funding for important projects, Senator Jackson has made a positive and lasting impact on the City of Goleta. I hope she knows how important her work has been for Goleta residents. We are deeply appreciative, and we wish Senator Jackson the best in her next adventures.”

Senator Jackson faithfully served California’s 19th Senate District and California’s 37th Assembly District, which include the City of Goleta, as Senator from 2012 to 2020, and prior to that as Assemblymember from 1998 to 2004. During this time Senator Jackson worked diligently to fund and preserve the Ellwood Mesa, a treasured open space on the Gaviota Coast. Her ongoing efforts and advocacy were integral to the establishment of this area as an open space for all to enjoy for generations to come.

In 2018 Senator Jackson’s efforts led to the City of Goleta receiving $3.9 million in state funding for the Ellwood Mesa Habitat Management Plan and Restoration. In September of 2020, with the State of California facing a major budget deficit due to the Coronavirus pandemic, Senator Jackson secured  an extension of the $3.9 million in grant funds until June 30, 2023, to ensure adequate time for the City of Goleta to plan and implement the expenditure of these funds.

The City thanks Senator Jackson for her service and wishes her the best in all future endeavors.