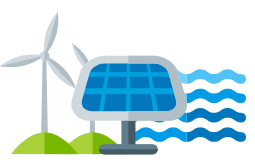 The City of Goleta wants to share information with its’ residents on renewable energy in preparation for the October 2021 launch of Central Coast Community Energy (3CE), a community choice aggregator. Other neighboring cities will begin the enrollment process in early 2021. This will be the first in a series of articles focused on energy related topics.

Goleta City Council adopted an ambitious goal in 2017 to reach 100% renewable energy by 2030. Shortly after, California passed a 2018 bill committing the State to a goal of reaching 100% renewable and zero-carbon electricity by 2045. There are many benefits to using renewable energy resources, but what is it exactly? And why is it important?

Since around 1900 the US has been dependent on fossil fuels, like petroleum, natural gas, and coal. These resources have a finite supply and damage the environment by releasing greenhouse gas emissions into the atmosphere when they are burned. By contrast, renewable energy, often referred to as clean energy, comes from natural sources or processes that are replenished at a rate that is equal to or faster than how quickly they are consumed. Innovative technologies and equipment have been developing and improving over the past few decades to harness these natural resources.

This sustainable form of energy is usually sourced from solar, wind, hydroelectric, biomass, or geothermal:

Why It Is Important

There are several positive impacts of clean energy, and as the industry grows and technology develops, these processes are becoming more efficient and cost effective. First and foremost, these resources naturally replenish in time, which makes them a smart and sustainable alternative to fossil fuels and provides us with energy security. Additionally, increasing the supply of renewable energy would allow us to replace carbon-intensive energy sources and significantly reduce greenhouse gas emissions. By reducing the pollutants in our atmosphere we are not only improving the environment, but also improving public health. The air and water pollution emitted by coal and natural gas plants is linked with breathing problems, neurological damage, heart attacks, cancer, among other health problems. Finally, the growth of this industry supports the economy and creates jobs. In 2018, the wind energy industry directly employed over 110,000 full-time equivalent employees and the solar industry employed more than 240,000 people.

Although the renewable energy industry is rapidly expanding, in 2019 only 11% of the US energy supply came from renewable energy, while 37% came from petroleum, 32% from natural gas, and 11% from coal. Goleta has taken initiative towards transitioning to renewable energy sources through the City Council adopted 100% renewable energy goal, the adoption of a Strategic Energy Plan, and in joining a Community Choice Energy aggregator. To find out more about Goleta’s sustainability efforts you can visit the City’s Sustainability & Climate Adaptation webpage here.