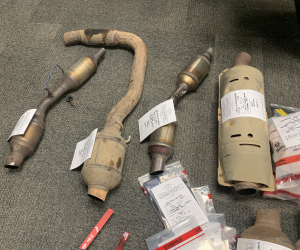 An incident that began in Goleta led to the arrest of four suspects from Los Angeles for numerous violations including thefts of catalytic converters.

On Monday, June 13, 2022, Goleta Police were dispatched to a report of a possible catalytic converter theft that had just occurred in the 7300 block of Greensboro Dr. in the City of Goleta. Deputies arrived shortly thereafter and located the suspect vehicle fleeing the area.

The pursuit of the suspects continued into the City of Carpinteria and ultimately ended in downtown Ventura when the suspect vehicle crashed.  The suspects fled the vehicle but were apprehended and arrested.

During a search of the vehicle, deputies located over a half dozen catalytic converters and theft related tools.

The suspects were booked at the Main Jail two were later released without bail in compliance with the local court’s extension of Emergency Rule 4.

The City of Goleta contracts with the Santa Barbara Sheriff’s Office for law enforcement services.