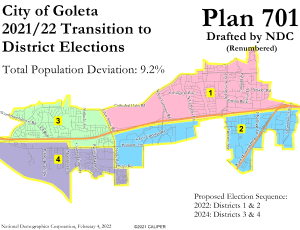 The City of Goleta has its first ever district elections map. The final map was chosen after a year-long process that involved a comprehensive #DrawGoleta public outreach campaign and consideration of more than 55 maps submitted by community members and five demographer maps. The City Council approved the City’s first district elections map at a special meeting on February 24, 2022, and approved a District Elections Ordinance on March 1,2022. The Ordinance establishes the district elections boundaries and adopts the sequencing of the elections. The second reading will take place at the March 15 City Council meeting.

Beginning this November, the City will be divided into four districts, and in sequenced elections voters in each district will elect a City Councilmember who lives in their district. The Mayor will continue to be elected by voters across Goleta.

Public participation was a critical part of the process to adopt a district elections map and included five public hearings. Ultimately, the City Council selected the renumbered Plan 701 (https://drawgoleta.org/plan-701-renumbered). The selected map was drafted by National Demographics Corporation (NDC) but derived from two plans submitted by members of the public. This plan was also one of four that were recommended by the City’s Public Engagement Commission.