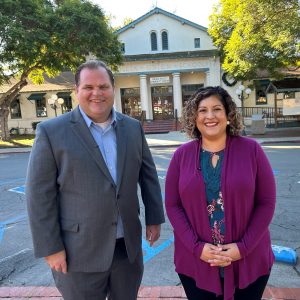 Districts Three and Four in Western Goleta will be decided in the 2024. The Mayor’s position is elected city-wide and will be on the 2024 ballot. To find out what district you live in, click here.

Luz Reyes-Martin may be a new face to the Goleta City Council but she is familiar to many in the community. She proudly served on the Goleta Union School District Board for the last eight years and is passionately involved in the community. Reyes-Martin has a Masters Degrees in land use planning and in public administration, and began her professional career working to support economic development and community programs at the city level. Later, she worked as the Executive Director of Public Affairs and Communications at Santa Barbara City College. Reyes-Martin lives in Goleta with her husband and two young children.

Upon certification, James Kyriaco and Luz Reyes-Martin will be sworn in and take their oaths of office at beginning of the December 20th Council meeting. The public is invited to attend in person in City Council Chambers (130 Cremona Drive, Suite B) or watch live on our website (www.CityofGoleta.org/GoletaMeetings) or Goleta TV Channel 19. At the meeting, the Council will also select a Mayor Pro-Tempore.