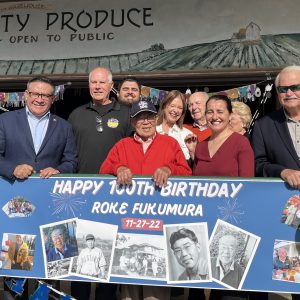 An inspiring Goleta recently turned one hundred years old. Ryiokio “Roke” Fukumura celebrated his centennial birthday with a big 100th Birthday Bash at the Tri-County Produce warehouse. At the celebration, City of Goleta Mayor Paula Perotte presented the long-time Goleta Resident with a proclamation to acknowledge this special milestone.

Roke has called Goleta “home” since 1963 – nearly 60 years ago! Roke was literally born in the produce business, delivered by a midwife on a farm on the Santa Barbara Mesa in 1922, and was one of six children. A lifelong sports aficionado, as a student at Santa Barbara High School, he set records in track and starred in baseball as a shortstop for the Dons in the 1941 CIF Championship year.

Life changed abruptly for Roke, when less than seven months later Japan attacked Pearl Harbor. He and his family wound up spending the last three years of World War II at an internment camp in Poston, Arizona. He tried to enlist in the U.S. Army but didn’t pass the physical exam. Santa Barbara High’s record holder in the 50-yard dash was rejected, ironically enough, because of a congenital bone growth in his leg. After the war, Roke’s family returned to Santa Barbara and in 1950 was hired by Tri-County Produce.

Amazingly, Roke STILL clocks 30 hours a week at Tri-County Produce! “He unloads the trucks, he stocks the shelves … He can still lift a 50-pound sack of onions,” said John Dixon, Tri-County’s general manager. “He’s obviously not as fast as he was 10 years ago, but just the fact that he’s here is amazing in itself. They don’t make them like him anymore.”

“I’ve enjoyed serving the public” says Roke, “I’ve met many wonderful people that commend us. Tri-County Produce is a very wonderful place to be and I love it.”

Happy Birthday Roke! We wish you health and joy. Thank you for making Goleta your home and for your love and passion for making your community a better place! ✨️

To read more about Roke’s incredible life, you can read his story on Noozhawk.