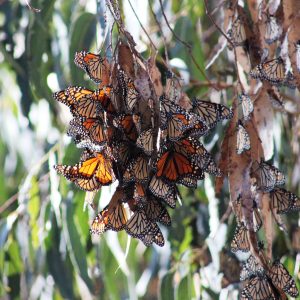 Rep. Salud Carbajal is taking action to help protect Monarch Butterflies which are historically an important part of our Goleta area.

Rep. Carbajal, Rep. Jimmy Panetta, and Sen. Jeff Merkley wrote to the Principal Deputy Director of the U.S. Fish and Wildlife Service expressing concern with the recent decision to forego listing the monarch butterfly under the Endangered Species Act and urging substantial investments in monarch conservation efforts so this crucial pollinator does not go extinct before protections are in place.

This monarch butterfly faces growing threats from the loss of milkweed and habitat, global climate change, and disease. The most recent population count for monarch butterflies shows a 99.9% decline in population for monarchs west of the Rocky Mountains, which overwinter in California. Just two decades ago, roughly 1.2 million monarchs overwintered in California. This year, that number is down to 1,914. The U.S. Fish and Wildlife service itself estimates that there is a 96-100% probability that the population of western monarch butterflies will collapse within 50 years. On December 17, 2020 the Service announced that listing the monarch as endangered or threatened was warranted but was precluded by higher priority species. This decision effectively puts the monarch butterfly on a waiting list but denies the species immediate protection. Some species have been on the waiting list for decades and, in fact, 47 species have gone extinct while waiting for their protection to be finalized.

“If the monarch’s precipitous decline continues, the Service must make prompt use of its emergency listing procedure to ensure its survival,” the lawmakers wrote. “To ensure the monarch does not become the 48th species to go extinct while on the candidate list, we urge the Service to make substantial investments in bold conservation actions that not only prevent the butterfly from further decline but also ensure long-term population stability.”

The letter garnered support from 43 conservation organizations, including the Center for Biological Diversity.

“We’re so grateful for the leadership of Reps. Carbajal and Panetta and Senator Merkley, who recognize that time is running out for America’s most iconic butterfly,” said Stephanie Kurose, a senior policy specialist with the Center for Biological Diversity. “Monarchs can no longer afford inaction. Without emergency help, these beautiful orange and black butterflies are on a sure path toward extinction. We need to be doing everything we can to save them and fight the extinction crisis. This letter to the Fish and Wildlife Service recognizes that urgency.”

Full text of the letter can be found here.