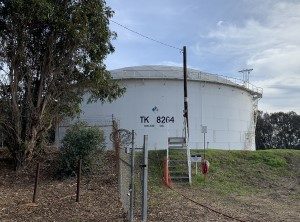 Work to remove leftover contaminants from the Ellwood Marine Terminal tanks and associated pipelines occurred in mid-January. The Ellwood Marine Terminal is located on the University of California’s property just east of the City of Goleta’s Ellwood Mesa. The facility was part of Venoco, Inc.’s crude oil operation, but has not been used since 2012. The University has since taken the lead to ensure the facility is decommissioned and contaminants are removed. As part of this effort, the tanks were degassed and pressure washed, with all liquids removed by a vacuum truck. Contaminants were transported to a permitted disposal/recycling facility offsite.

The clean-up effort also included degassing a portion of the pipeline leading from the decommissioned tanks. Access to the pipeline took place at a vault located on City of Goleta property, at the southeastern portion of Ellwood Mesa. The project was permitted by the California Coastal Commission and included safety controls to prevent spills. The project did not involve any tree or vegetation removal and did not adversely impact any sensitive biological resources. Recent surveys determined no monarch butterflies or nesting birds are in the vicinity of the work. There was no grading, excavation, or ground disturbance to degas and remove sludge from the tanks and pipeline. Beach access and recreational trails at Ellwood Mesa remained open during the work.

Questions or concerns about this project can be directed to George Thomson, Parks and Open Space Manager at 805-961-7578 or gthomson@cityofgoleta.org.