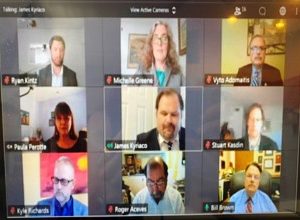 The City of Goleta has a proud record of proclaiming its commitment to inclusivity, diversity and equity. The City Council has expressed a commitment to making Goleta a welcoming, inclusive, and safe community for everyone, and to promoting free thought and speech, while condemning racism and police brutality, hate speech, bigotry, violence and prejudice. However, with the recent tragedy against George Floyd and others, and the ensuing activism, advocacy and protests that have developed across the country, several councilmembers requested a resolution be drafted for their consideration.

This is an important issue for the public as well. Sixty-eight people sent in public comments to the City Clerk’s office, two people called in and spoke, and 12 people opted to have their comments read into the record during the City Council meeting.

Goleta Mayor Paula Perotte said, “Today’s meeting was an important first step in addressing our current law enforcement challenges, but this resolution is only a first step. Our Council remains committed to assuring that all residents receive fair and equitable treatment, that police receive the proper training and equipment, and that all Sheriff personnel are held accountable for their policies and practices. It was very important to me to have had Sheriff Brown as part of today’s meeting and for it to serve as a stepping stone for a more open dialogue between the Council and Sheriff’s office. The issues we are dealing with are national issues, and I see our Sheriff and police as being leaders.”

The City of Goleta contracts with the Santa Barbara County Sheriff’s Office for law enforcement services, so it was important for the City Council to have Sheriff Bill Brown as part of the meeting. He was able to provide information and answer questions from Council.

Sheriff Brown said, “I hope that the information provided gives you the following assurances: that we in the Santa Barbara Sheriff’s Office take your concerns seriously; that we are continuously working to insure that our organization provides the best possible protection and service to everyone in our community; and, that we endeavor to do so in a fair, unbiased and just manner.” He added, “Our organization doesn’t always get things right, but we strive to treat people the right way. We operate transparently, hold ourselves accountable, and we continuously seek to improve.”

If you missed the meeting, you can watch it anytime on the City website at www.CityofGoleta.org/GoletaMeetings.