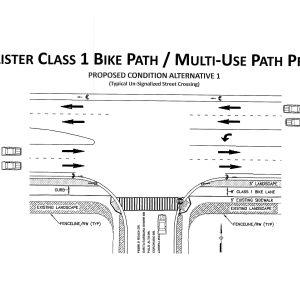 Over 50 people attended the Hollister Class 1 Bikeway Open House last month to review two proposals for a bike way on the south side of Hollister Avenue. It was great to see the interest from cyclists, parents, teachers and community members as they viewed the plans.

Here’s a summary of the proposals: 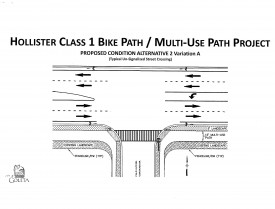 The City was successful in obtaining Active Transportation Program funding for the project and was recently awarded a $1.65 million grant from the California Transportation Commission (see article here.)

Prior to finalizing the preferred design alternative there will be several additional steps. The City will continue to work with design consultants to develop the alternatives and will look carefully at each side street crossing, while incorporating or researching answers to comments and questions gathered at the public meeting.  The City Council will then be asked to weigh in with their opinions and comments.

Construction is anticipated to begin summer of 2015.  For more information on the Hollister Class 1 Bikeway, please visit http://cityofgoleta.org/projects-programs/bicycle-projects/hollister-class-1-bikeway.