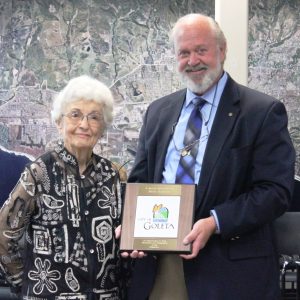 The Goleta City Council had the privilege of recognizing long-time Goleta resident Betty Rosness’ community involvement for the last forty years. She received a City tile at the September 2 City Council meeting for her contributions to our community.

Betty has received a number of other honors and awards.  In 1998 she was named Woman of the Year by the Goleta Chamber of Commerce and in 2001 Betty Rosness received the Westmont Medal.  This award recognizes “those in our community whose lives embody the very principles associated with Christian life-integrity, service, compassion, responsibility, faithfulness, discipline and generosity.  Other awards Betty has received include the Santa Barbara County Woman of the Year, Ad Club Woman of the Year, UCSB Affiliates of the Year, Soroptimist International Woman of Distinction, News Press Lifetime Achievement, and the Paul Harris Fellow Award from Rotary Club North.

Betty has shown her enthusiasm and dedication for non-profit organizations in many ways. This year she went even further to raise awareness for her favorite causes by celebrating her 90th birthday, skydiving from 11,000 feet in the air! What an amazing act showing love and support for her community.

Betty is an Oklahoma native who moved to Goleta in 1968.  She and her husband Hank, a U.S. Air Force Lieutenant Colonel, were married for over 50 years when he passed away.  They are the parents of five children.

We are proud to have such an admirable woman in our community.  Congratulations Betty!