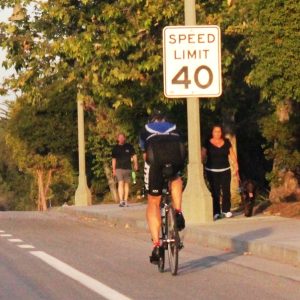 Things are looking up for the future of cycling and better pedestrian access in Goleta.  The City recently received notice of award of $3.6 million in two Active Transportation Program (ATP) grants from the California Transportation Commission.  The two projects that received funding are the Hollister Avenue Class I Bike Path Safe Routes to School Project and the Ekwill Street & Fowler Road Extensions Project – Bicycle/Pedestrian Improvements Project.

The Hollister Class 1 Bike Path Project is a Safe Route to Schools Project.  The $1.644 million grant will be used to construct a Class I Bike Path from Pacific Oaks Drive west to Ellwood School. The project will replace existing sidewalks and the existing trees with new street trees and provide a Class I bike facility that will enhance the users use along this stretch as well as provide increased safety for students walking and bicycling to school. Hollister Avenue will still have four lanes of travel with a center left turn lane. The project will be constructed in Summer 2015. (LINK TO THE WORKSHOP ARTICLE)

The Ekwill Fowler Bicycle and Pedestrian Improvement Project received $2.010 million for constructing sidewalks and Class II bike lanes for the Ekwill Street and Fowler Road Extensions Project. These funds provide an important infusion of revenue since other project costs have risen above the initial estimate.  The project objective is to increase connectivity for all transportation modes.  Construction is expected to begin in late 2015.

This was the first cycle for this new grant program which replaces the Safe Routes to School, Bicycle Transportation Account and other grant programs. The ATP focuses on bicycle and pedestrian transportation and contains a general and a Safe Routes to School component.  This grant process was highly competitive with 772 applications requesting over $1 billion.  $368 million of funding was granted.

For more information on both of these projects, please visit www.ProjectGoleta.com.