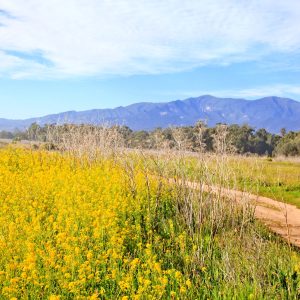 The City of Goleta is proud to have a new, beautifully restored landscape on Ellwood Mesa. The on-going effort and care of our environment from many in our community, has achieved the replenishment of native grassland for a beautiful and enjoyable open space for Goleta residents, visitors and animal life.

For the last five years, volunteers have worked in conjunction with the City to restore the native grassland on the east side of Goleta’s Ellwood Mesa. Now that the five-year maintenance mark has been reached, the restoration program (which was part of the land exchange and purchase of Ellwood Mesa) has been determined a success by the Coastal Commission!

The benchmarks for success of the project were identified in the permit conditions of approval. Those benchmarks were:

The consistent work of City of Goleta and Coastal Commission was instrumental in the achievement of these goals.

The nature of the restoration was difficult due to the use of prolific weed seed that competes with the native grassland. After much perseverance, the restoration was precisely completed and is now difficult to discern from the surrounding native grassland. The site is now a wonderful piece of land that benefits the environment, the community and the wildlife that reside there.