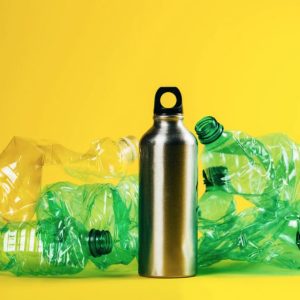 Protecting the environment is part of Goleta’s core values. Yet, single-use plastics of all shapes, sizes, and colors are popping up everywhere – from cocktails to delivery food. Those plastics make their way into our neighborhoods, waterways, and beaches. Goleta is poised to take action to tackle the plastic pollution problem locally. In May, the Goleta City Council adopted an ordinance requiring single-use foodware accessories and standard condiments to only be available upon request. As an impactful second step in doing our part to reduce plastic waste, the City’s Sustainability Program is now proposing to tackle further reduce plastic waste in our community by regulating disposable polystyrene foodware, mylar balloons, and other single-use plastics in a new proposed ordinance.

Polystyrene is a light, inexpensive material made of petrochemicals. You have probably seen it in the form of clamshell food containers, cups, or plates. Because it’s so light, polystyrene easily ends up as litter in streets and waterways. These products not only pollute the environment, they contain styrene, a carcinogen which can leak into food when heated1. Goleta is on the precipice of joining the 154 jurisdictions in California that have already regulated polystyrene.

Mylar balloons (the metalized plastic kind) and single-use plastic foodware like utensils also pose threats to the environment. Mylar balloons can be mistaken for food by marine life if they end up in the ocean as litter. They can also cause power outages when caught in power lines. In 2021, Mylar balloons were responsible for 1,103 power outages2! Single-use plastic utensils and straws are not recyclable and often end up in creeks and beaches where they can impact aquatic wildlife and litter our neighborhoods. The proposed ordinance addresses these plastic pollution offenders.

The new ordinance also encourages reusable foodware for on premises dining and bringing your own cup or containers for beverages. This will not only reduce waste but also save money!

The proposed plastic waste reduction ordinance will be presented in the spirit of doing our part as a coastal community to tackle the problem of plastic pollution. The vast majority of all plastic produced, seventy-nine percent (79%), is accumulating in landfills or becomes litter in our communities and beaches. Nearly every piece of plastic ever made still exists on Earth, regardless of whether it has been recycled, broken down into smaller bits, or floating in the ocean. The City of Goleta is proud to take steps to reduce plastic waste community-wide, while protecting our health and environment and paving the way for a more sustainable future.

Learn more about the City’s single-use plastics ordinance and all of our sustainability programs at www.CityofGoleta.org/sustainability.