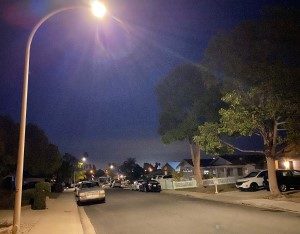 City of Goleta is moving forward with its LED Street Lighting Project after receiving approval from City Council. On July 20th, the Goleta City Council unanimously voted to approve the design plans and authorize the LED conversion agreement amendment for the LED Street Lighting Project. This is a major milestone in the City’s sustainability efforts as we will be replacing approximately 1,300 High Pressure Sodium (HPS) streetlight fixtures throughout Goleta with new energy efficient LED streetlights. The project is expected to save Goleta over 345,000 kilowatt hours and approximately $115,000 in energy costs in the first year after the project is implemented. In addition to saving the City money, the new lights will require less maintenance and provide clearer lighting.

Cecilia Brown, a 50-year resident of the City of Goleta said, “The City’s LED Street Light Project is a very important and significant capital improvement project which will benefit all of Goleta and its residents. Staff has been most accommodating in working with the public and responding to their inquiries. Kudos to LED Street Light Project manager Michael Winnewisser and Deputy Public Works Director James Campero for recognizing and promoting Goleta standards in project design.”

In 2020, the City acquired the streetlights from Southern California Edison and began looking into different LED options for our community. In January 2021, we held a pilot study to get community input. Based on feedback from the pilot study, Green Committee, and Virtual Town Hall, the City has selected GE fixtures that are 2700K color temperature streetlights. The wattage of the LED fixtures will vary depending on the road type of the light’s location: arterials, collectors, and residential streets will all vary in brightness. The busier streets will have higher energy, and thus brighter lights.

Design maps showing the existing and proposed streetlight fixture wattages throughout the City, as well as other project design considerations and recommendations, are available on our website at www.CityofGoleta.org/LEDStreetlights.

City staff is currently coordinating with our consultant and their subcontractor to approve and place the order for LED streetlights needed for conversion to begin. The LED streetlight fixtures are anticipated to take approximately two months to ship and arrive. City staff will update our website and do outreach with the proposed conversion schedule once the LED streetlights are received and construction is ready to begin.

Please contact Project Manager Michael Winnewisser at (805) 690-5120 or mwinnewisser@cityofgoleta.org for any questions or additional information.