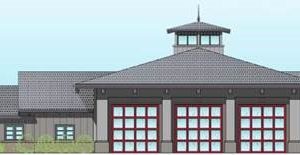 The City of Goleta is excited to report on an important milestone in the development of Fire Station 10 in Western Goleta. The California Coastal Commission (CCC) deemed the City’s Coastal Development Permit (CDP) application complete and will hold a hearing on the project in the next six months. It has long been documented that fire service in Western Goleta does not meet the National Fire Protection Association (NFPA) guidelines for emergency response time and population to firefighter ratio. A new fire station is needed in Western Goleta to provide adequate fire protection services.

The Fire Station 10 project consists of the design and construction of a new three-bay, single-story fire station, approximately 11,600 square feet in size, with associated landscaping and appurtenant facilities on a City-owned parcel located at 7952 Hollister Avenue, across from the Sandpiper Golf Course.

The Goleta City Council approved the project in December 2018. However, because the subject site is in the Coastal Zone, a Coastal Development Permit issued by the California Coastal Commission is required. The City submitted a CDP application in January 2019, and after completing additional studies requested by CCC staff, the City recently learned that the CDP application has been deemed complete. Based on State law, once a CDP application is deemed complete, the CCC is required to hold a hearing on the project within six months.

Upon learning the news, Goleta Mayor Paula Perotte said, “We are thrilled to reach another milestone in the development of Fire Station 10 which will provide critically needed fire suppression and emergency medical assistance to areas of Western Goleta and beyond.”

Goleta’s Director of Neighborhood Services & Public Safety, Vyto Adomaitis added, “Fire Station 10 is an important public safety facility that will greatly benefit the residents of Goleta. Its need was identified as early as 1967 so the City is proud to be bringing this project to fruition. We look forward to working collaboratively with Coastal Commission staff to reach approval of the City’s CDP application.”

“Our goal is to go out to bid and have a construction contract awarded by the end of the year, provided we obtain a CDP hearing sooner rather than later,” said Mr. Adomaitis.

Click here for more information on the Fire Station 10 Project.