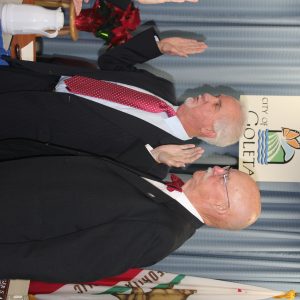 Councilmembers Jim Farr and Ed Easton took their Oath of Office at the December 4 council meeting. The newly-elected Farr and reelected Easton will serve four-year terms. Roger Aceves was appointed Mayor and Michael T. Bennett was named Mayor Pro Tempore. Margaret Connell was also recognized for her eight years of service to the City. She was elected in 2002 and 2008 and served as the City’s first mayor. Thank you Margaret!