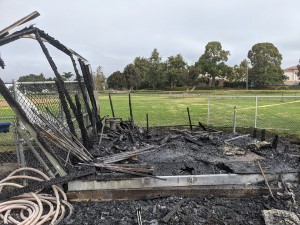 The City of Goleta is lending a helping hand to the Dos Pueblos Little League (DPLL) to help pay for equipment destroyed in a suspected storage shed arson fire that occurred on August 18th at Girsh Park.  The estimated $30,000 loss includes but is not limited to pitching machines, bases, general baseball equipment and the storage shed itself. Graffiti was located nearby that may potentially be related to the fire. With the support of the City Council, Goleta City Manager Michelle Greene authorized a $5,000 grant to DPLL to help replace the equipment.

City of Goleta Mayor Paula Perotte said, “This donation confirms that the City of Goleta stands by DPLL and by Girsh Park, a vital and valued community space. We are committed to helping promote peaceful enjoyment of our parks for all members of our community, as we condemn all acts of vandalism and violence.”

While Girsh Park is not a city-owned facility, it is well-loved by the community and supported by the City of Goleta. Since its inception in 1997, the park has been operated by a non-profit organization, the Foundation for Girsh Park. DPLL, also a non-profit organization, has been in operation since 1974 but moved to Girsh Park when it opened.  DPLL has played there ever since and stored its equipment in a shed at the park.

Goleta City Councilmember Kyle Richards, who has served as the City’s representative on the Foundation for Girsh Park Board since 2017, said, “The City will stand up against this assault on our community. This is not what our community is about, and this does not represent the values of our City or its residents. We are saddened and outraged over the destruction at Girsh Park, both the graffiti vandalism and the arson.  We know that our community’s residents, businesses, and visitors will rally around the Dos Pueblos Little League and Girsh Park, and that’s why we are Goleta Proud.”

Goleta Mayor Pro Tempore James Kyriaco added, “Our local children and youth deserve to live in a community free from fear and danger. Our hope is that this equipment and shed can quickly be replaced so that our youth can make new, happy memories out on the fields.”

Members of the public who wish to support Girsh Park or the Dos Pueblos Little League are encouraged to visit their websites at www.girshpark.org and www.dpll.net.  Finally, the City encourages anyone with information regarding the storage shed fire to contact the Santa Barbara County Fire Department by sending an e-mail to FireInfo@SBCFire.com.  Any tips related to the vandalism should be directed to the Santa Barbara County Sheriff’s Office at 805-681-4150.  For anonymous tips call 805-681-4171 or online at www.sbsheriff.org.