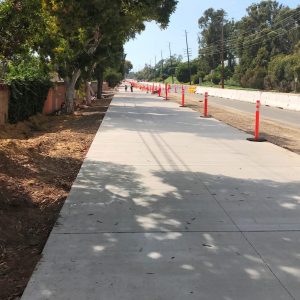 Those of you that have driven along Hollister Avenue in western Goleta have seen the construction on the Hollister Class I Bike Path. The project is moving along nicely and we are pleased to announce that one of the bike path sections (between Entrance Road and Pebble Beach Drive) is now open for pedestrians and bicyclists! The K-rail will remain in place and there will be no change to the traffic configuration.  Signing and striping will not be installed on the new pathway and cross streets until the final stages of construction on this project in late October/early November. Between Pacific Oaks Road and Entrance Road, pedestrians and bicyclists remain in the temporary detour pathway behind the K-rail.

Temporary bus stops remain at the same locations, which are East of Palo Alto Drive and West of Cannon Green Drive, and access is provided from the new pathway to the bus stop location at the K-rail.

Once construction between the pathway and the K-rail is complete, the project will move into Stage 3 where the K-rail will be removed, the pavement rehabilitation will be done on Hollister Avenue for the entire length of the project, and the final pavement delineation and signage will be installed.  We anticipate moving into Stage 3 in mid-late October.

Thank you for your continued patience as this project nears completion.

Sign up here for project updates via email and/or text message. For more information on the Hollister Class I Bike Path project, visit http://tinyurl.com/HollisterClassI.