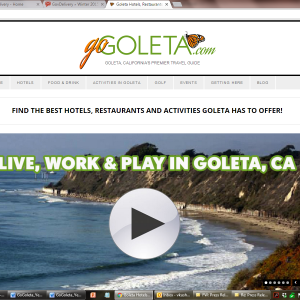 The numbers are in and Goleta continues to shine as a visitor destination. The figures released at Visit Santa Barbara’s annual Travel Outlook event are very positive with year-to-date data showing continued growth in number of visitors to our area, amount they spend and overall lodging industry revenue.

An update on the City of Goleta revealed continued growth and even some record-breaking numbers in the tourism market.  Goleta’s occupancy, which is the rate used by hoteliers to measure how many of their available rooms are filled, was an average 82.4% in 2015, up from 77.2% in 2014. Goleta’s Average Daily Rate (ADR) was $173, up 8.5% for this year.

One of the largest and record-breaking figures was Goleta’s RevPAR, which measures total revenue available per room, was up 15.6% in 2015.

Overall, Goleta had some of the largest gains in Santa Barbara County and showed growth across the board. In 2014, visitor spending in Goleta topped 238 million.

The City contracts with the Goleta Valley Chamber of Commerce (GVCoC) which represents GoGoleta.com and plays a leading role in the success of the tourism industry by attracting travelers and helping them explore Goleta.

This data was provided by STR, www.str.com and Visit Santa Barbara’s 2014 Annual Report. STR is a global provider of metrics and research to the hotel industry.