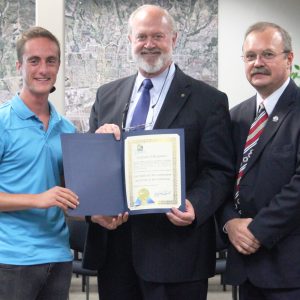 There are several opportunities for serving the community at City Hall in 2016.

Compensation is set at $50 per meeting. The student commissioner may choose to waive their compensation to receive community service credit.

The Design Review Board is a seven-member body with responsibility to encourage development that exemplifies the best professional design practices so as to enhance the visual quality of the environment and prevent poor quality of design. The members shall be skilled in reading and interpreting architectural and landscape drawings and able to judge the effects of a proposed building, structure, landscaping or sign upon the desirability, and development of surrounding areas. The Design Review Board meets the second and fourth Tuesdays of each month at 3:00 p.m. and are compensated at the rate of $50 per meeting.

Three (3) appointments will be made to the Design Review Board for the following positions. Members will be appointed to a three year term:

The Board of Trustees consists of eight members, five of which are appointed by the County Board of Supervisors and three of which are appointed by the City Councils of the member cities of Carpinteria, Goleta, and Santa Barbara according to the provisions of the “Mosquito Abatement and Vector Control District Law” under the California Health and Safety Code Section 2022.

One (1) appointment will be made to the Santa Barbara Coastal Vector Control District Board.  To be eligible to apply, candidates must reside within the City of Goleta. The application deadline is Monday, January 11, 2016, by 5:00 p.m.

Applications may be obtained from and must be returned to the City Clerk, City of Goleta, 130 Cremona Drive, Suite B, Goleta, CA  93117. Application forms are available at the City’s website at www.cityofgoleta.org/city-hall/city-clerk/boards-commissions/applications-for-appointments. For more information or to obtain an application, contact the Deborah Lopez, City Clerk’s office at dlopez@cityofgoleta.org.