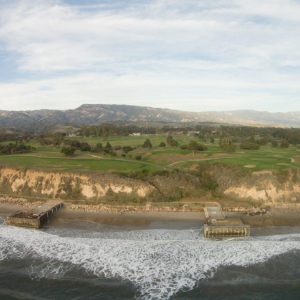 The end of an era began August 29 at Haskell’s Beach, as the State Lands Commission in collaboration with the City of Goleta started work to remove the pier and caisson structures known as PRC 421-1 and 421-2. It’s a process that will take up to six months, during which time sections of the beach may close temporarily to keep the public safe during the operations. The beach will remain open otherwise.

This landmark decommissioning project marks the end of the Ellwood Oil Field that began production in the late 1920s and continued into the 1990s. At one time, the area off Haskell’s Beach hosted 13 large piers and significant oil storage and processing facilities immediately onshore, a latticework of oil and gas development.

“These two derelict structures represent the last vestiges of pier-based oil and gas production in California and their removal is a major milestone for the region and the state,” said State Controller and State Lands Commission chair Betty T. Yee. “Removal of these piers is one of several decommissioning projects the Commission is spearheading as part of California’s transition to a fossil fuel-free future.”

“This is a truly momentous occasion,” said Mayor Paula Perotte. “This project, the culmination of a multi-year partnership between Goleta and the state, will remove two blighted and derelict structures marring our beautiful coastline. Their removal is a major step in ending a legacy of fossil fuel development in Santa Barbara County.”

Crews will work Monday through Friday from 6:00 a.m. to 5:00 p.m. Due to the surf zone location of the facilities, some work must be scheduled around low-tide cycles, which may be outside of these hours. The project requires the use of heavy equipment at the worksite and the transport of approximately 500 truckloads of material to an approved recycling and disposal facility. Crews will access the worksite via the existing gravel access road adjacent to the Ellwood Onshore Facility and along a 12’-wide easement across the Sandpiper golf course and along the cliff to the piers. Removal of the piers and caissons will require equipment access along the beach during low tides.

The Commission prepared an Environmental Impact Report and secured permits for this project in collaboration with federal, state, and local agencies. More information can be found at: www.slc.ca.gov/ceqa/prc-421-decommissioning-project.

Pictured: Aerial photo of PRC 421-1 and 421-2, courtesy of the California State Lands Commission