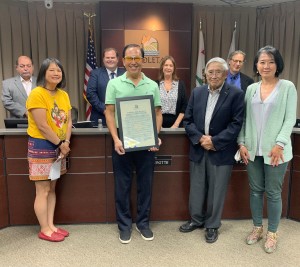 The City is pleased for the opportunity to officially recognize and celebrate the many significant cultural, historical, and economic contributions Asian Americans, Native Hawaiians and Pacific Islanders have made to Goleta. Mayor Perotte presented a Proclamation to long-time Goleta resident Michael Cheng at the May 17 Goleta City Council meeting proclaiming May as Asian American, Native Hawaiian and Pacific Islander (AANHPI) Heritage Month in the City of Goleta.

The City of Goleta issued the Proclamation in acknowledgment of the historical and cultural contributions of Asian Americans, Native Hawaiians and Pacific Islanders in the development of the State of California and to show the City’s commitment to being a welcome and inclusive place for all.