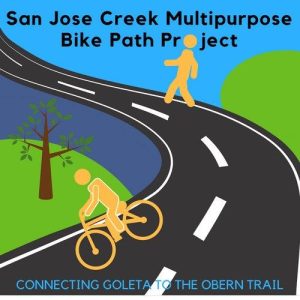 The City has a number of projects in the works, including the San Jose Creek Bike Path Project. When completed, the path will extend approximately three miles alongside San Jose Creek from Cathedral Oaks Road (in the County of Santa Barbara) to the Atascadero Creek Bikeway/Obern Trail near Goleta Beach. The bike path will provide an alternative means of transportation for commuters as well as a source of recreation.

The San Jose Creek Bike Path Project is being worked on in two portions, the middle extent and the southern extent. For the middle extent, a Class I Bike Path will be constructed along the west side of San Jose Creek extending from Calle Real to Hollister Avenue. The middle extent project has been broken into two segments identified as Segment 1 and Segment 2. Segment 1 is the portion of the bike path which extends from Armitos Avenue south to Hollister Avenue. This section is currently under construction with the City’s Hollister Kellogg Park project. Segment 2 is the portion of the bike which extends from Armitos Avenue north to Calle Real. This segment is in preliminary design. Learn more here.

The southern extent extends from Hollister Avenue south along the new Class II bike facility proposed along Kellogg Avenue (to be constructed with the Ekwill Street project) and then will cross San Jose Creek Channel via a pedestrian/bicycle bridge, to follow along the west side of State Highway 217 connecting to the existing Class I Atascadero Creek/ Obern Trail. This segment is currently in preliminary design. The City is coordinating with Santa Barbara County and Caltrans for the project. Click here for more information.