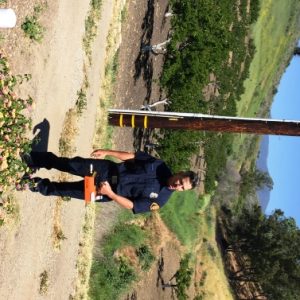 In response to last year’s search for the mysterious release of hydrogen sulfide in western Goleta, the City of Goleta purchased a highly-sensitive H2S monitor for Fire Station 11 that will help first responders more quickly locate future sources of these potentially dangerous odors. For a recap of last October’s Hydrogen Sulfide incident, please read our Monarch Press article “What was that Smell?”

The new Jerome J605 H2S Detector is significantly more sensitive — over 6,000 times — at detecting Hydrogen Sulfide than what is currently used by the Santa Barbara County Fire Department, enabling firefighters to locate and address potential problems faster. The detector will be located at Fire Station 11 in western Goleta, and will be available for use countywide.  According to the fire department, the majority of nuisance odor complaints in Santa Barbara County occur in the western Goleta area. In 2015 county fire responded to 175 calls to investigate suspicious odors or steam, with 116 of those calls coming from Goleta, and 69 from western Goleta.

The detector was funded by the City of Goleta’s Public Safety Fund, which is funded entirely by Camino Real LLC (owner of Camino Real Marketplace). Camino Real LLC has contributed over $1,050,000 for Goleta public safety efforts since 2008. Contributions are used for funding public safety needs: operations and equipment purchases, public education and emergency preparedness effort, community emergency response training and certification, public outreach and communication – emergency notifications systems and/or other community projects mutually desired and agreed upon by Camino Real LLC and the City.