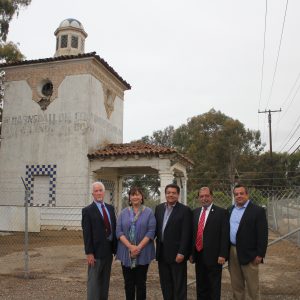 On June 11, Ty Warner announced his decision to donate the historic Barnsdall-Rio Grande Gas Station to the City of Goleta.  Originally part of the Sandpiper Golf Course property, Mr. Warner’s contribution of the Spanish colonial-designed station includes both the structure and the surrounding land access.

The potential gift had been in the works for years as Mr. Warner and his team consulted and worked with then Mayor Aceves and the city planners on ways to preserve the Barnsdall station for its highest and best use for the community. Warner determined the best, most enduring path for the future of the station is to put it in the hands of the city in perpetuity.

Once the official transfer is complete, the City of Goleta plans to provide a thorough property assessment and work with local experts, historians and residents in determining the next steps for the site.  Whatever they turn out to be, the structure will be honored and preserved.

Built in 1929, the Barnsdall-Rio Grande Gas Station originally served as the entrance to Barnsdall oil field that dominated the coastline at that time. Its compelling design is the product of the initiative by Pearl Chase to improve the appearance of filling stations.

The station was abandoned by the 1950s, yet garnered more fame used in the remake of the movie “The Postman Always Rings Twice” in 1980.