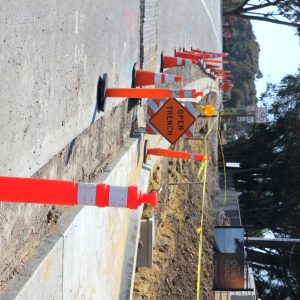 The City continues to pursue its aggressive Capital Improvement Program to meet the goals of the City Council and the community. Listed below are several projects that are on the move:

The bridge over the Union Pacific Railroad at Los Carneros needs to be replaced, and the City expects to begin that work later this summer. The Los Carneros Bridge Replacement Project will take approximately 18 months to complete and will impact traffic as it will temporarily reduce the lanes from four lanes to two. Traffic will be shifted to one side of the bridge while the other side is torn down and rebuilt. Then traffic will be shifted to the newly-built side while the other half is torn down and rebuilt. People who work off of Los Carneros will be encouraged to use the Fairview or Glen Annie/Storke off-ramps to avoid the delays that come with construction. More detailed traffic information will be released as the project gets closer.

A new Class I bikeway on the south side of Hollister Avenue (between Pacific Oaks Road and Ellwood School) is under consideration. The City will be evaluating a number of design options to determine what is feasible and will be working with the community to see which best meets the needs of the area. Community engagement efforts are expected to commence in late spring/early summer. Visit www.ProjectGoleta.com for more.

City-owned tennis courts around Goleta will soon be resurfaced. Improvements have been in the works for quite some time but the funding has recently become available. The resurfacing of these courts is expected to start in late spring and take a month or so to complete.

Work on the San Jose Creek Project will begin again as the “rainy season” is considered over on May 15. The installation of the panel walls will be completed, and the articulated revetment will be placed along the channel bottom.

New sidewalks are in store for Patterson Avenue between Hollister Avenue and Debbie Street. The City was awarded $50,000 through the Measure A Alternative Transportation Grant Program which will be used to fund this improvement.

Other funding sources include Measure A Local Funds, Gas Tax and the City’s General Fund. The City is working on final design of improvements to Old Town circulation with the Ekwill Fowler Road Extensions Project. This project proposes four roundabouts—two at the Highway 217 on- and off-ramps, one at Ekwill and one at Fowler to improve the flow of traffic and provide additional connections between Fairview and South Kellogg. To learn more and to sign up for email updates, visit www.ProjectGoleta.com.