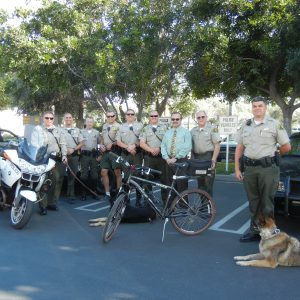 The safety of our community is one of our highest priorities. Through help from a $68,250 grant from the California Office of Traffic Safety (OTS), we will conduct 12 sobriety checkpoints throughout the City in 2013.

2. Apprehending DUI drivers that are driving; and

3. Educating the public as to safe driving, the need for a valid driver’s license and insurance, and the dangers associated with impaired driving.

The deterrent effect of DUI checkpoints is a proven resource in reducing the number of persons killed and injured in alcohol or drug-involved crashes. Research shows that collisions involving alcohol drop by an average of  20% when well-publicized checkpoints are conducted on a more regular basis.

On average, we have between 600 and 1,200 cars travel through one of our sobriety checkpoints. This is a great way to educate large numbers of the motoring public by being personally contacted regarding impaired driving. If you have never been through a sobriety checkpoint, here is what you can expect…

Officers will be looking for signs of alcohol and/or drug impairment along with a proper driver’s license. This initial contact is very brief in an effort to keep the delay of motorists at a minimum. If you should show signs of impairment, to any degree, you will be asked to pull to the side of the road where the deputy will conduct further investigation on the level of your impairment. Should you get arrested for driving impaired, you can expect jail time, license suspension, insurance increases, court fines/fees, DUI classes, vehicle impoundment and other expenses (which can exceed $10,000). All too often, members of our community are senselessly injured or killed on local roadways by impaired drivers. In 2011, there were 24 DUI collisions claiming three lives and injuring 18 of our friends and neighbors in Goleta. The Goleta Traffic Unit asks that you designate a sober, nondrinking driver. And please…drive safely on our roadways! One mistake not only changes your life, but it also changes the lives of other motorists who share the roadways with you.