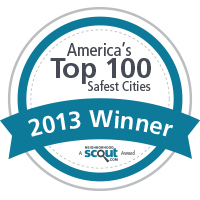 The City of Goleta has been recognized as one of the top 100 Safest Cities in America by Location Inc., owner of the Neighborhood Scout community data research service. Goleta was ranked the 95th safest city, one of 23 cities in California and the only city in Santa Barbara County to make the list.

“The City of Goleta has always placed a high priority on public safety and it is rewarding to see our efforts result in a ranking in the top 100 Safest Cities,” said Mayor Roger Aceves. “I would like to commend the efforts of our Goleta Police Department because their dedication and vigilance is instrumental in creating the safe community that we enjoy.”

This recognition validates the collaboration between the Goleta Police Department, our neighborhood watch, our business watch and our Nextdoor participants in keeping Goleta a safe place to live and work. Each year, Neighborhood Scout publishes their top 100 Safest Cities in America list calculated on cities with a population of 25,000 or more and based on the total number of crimes per 1,000 residents. Crimes include burglary, larceny-theft, motor vehicle theft, homicide, forcible rape, armed robbery and aggravated assault. Since the City of Goleta incorporated in 2002, the City has contracted with the Santa Barbara County Sheriff’s Office for law enforcement services.