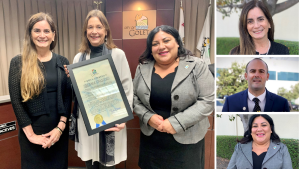 Mayor Paula Perotte said, “We are so incredibly grateful for our talented City Clerks team. Their attention to detail is outstanding, and the work they do is truly exceptional. We could not function without this team.”

The City of Goleta is fortunate to have a veteran City Clerk. Deborah Lopez has been with the City almost since the beginning, she celebrated her 19th anniversary on May 5. Deputy City Clerks include Liana Campos and David Cutaia. If you want to brighten their day and let them know what a great job they are doing, send an email to CityClerkGroup@cityofgoleta.org.

The City Clerk Division serves as the information center on functions of local government and provides a professional link between community members, local governing bodies, and agencies of government at all levels. The Division is also the Historian of the Records, taking care of the entire recorded history of the City.

The Division has many duties and responsibilities, including attending all City Council meetings and maintaining a record of the proceedings, ordinances, resolutions, written contracts, and official bonds; serving as the election official for the City of Goleta; overseeing Boards, Commissions and Committees; and much more.

The City Clerk Division has been exceptionally busy the past couple of years overseeing more than 160 virtual meetings. The team also oversaw a public engagement and electoral district drawing process for the City’s historic move to District Elections this November. The group was also in charge of coordinating the Council Chamber Audio Visual equipment upgrade and implemented the online NetFile system for Form 700 filings by staff and elected and appointed officials.

Learn more about the City Clerk Division at https://www.cityofgoleta.org/city-hall/city-clerk/.