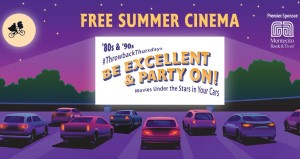 UCSB Arts & Lectures’ FREE summer cinema takes a trip back to the drive-in (and back in time!) with a series of nostalgic comedy and adventure flicks from the ’80s and ’90s. Party on, dudes! Films play Thursdays this summer, July 1 – August 12, at 8:30 p.m. at the West Wind Drive-In (907 S. Kellogg Avenue).

Click here for more information on each film. Some films include themes and attitudes that are representative of a different era and include content that parents may wish to discuss with their children.