Drivers and pedestrians will notice improvements at two intersections in Goleta this month. The City recently completed construction of the pedestrian crosswalk improvements on Hollister Avenue and Calle Real including installing a Rectangular Rapid Flashing Beacons (RRFB’s) system at Hollister Avenue and Chapel Street and a Pedestrian Hybrid Beacon (PHB) system at Calle Real and Kingston Avenue. The RRFB and PHB systems will provide an additional visual cue to alert motorists when a pedestrian intends to cross the street.

Rectangular Rapid Flashing Beacons
The project’s first location included pedestrian activated RRFB’s at the Hollister Avenue and Chapel Street intersection. The three-way intersection had an existing striped crosswalk without any stop controls. The crosswalk serves Goleta Valley Cottage Hospital on the south side connecting them with businesses and residences on the north side of Hollister Avenue. The City extended the curb slightly to align the Americans with Disabilities Act (ADA) curb ramp with the new crosswalk striping. The RRFB’s are a federally approved Manual on Uniform Traffic Control Devices for Streets and Highways (MUTCD) signal for pedestrian-actuated crosswalk enhancements. The RRFBs use rectangular-shaped high-intensity light-emitting-diode (LED)-based flash indicators in a randomized pattern to alert motorists of a pedestrian’s intent to use the crosswalk. The RRFBs patterns have shown increased driver yielding behavior compared to no stop controls or the standard circular yellow flashing warning beacons, thereby increasing pedestrian safety. The intersection improvements also included new striping, signage, crosswalk lighting, and ADA ramps.

Pedestrian Hybrid Beacon
The City constructed a PHB [formerly known as a High Intensity Activated crossWalK (HAWK)] system on mast arms over the Calle Real travel lanes at Kingston Avenue. The PHB system replaced the previous old style yellow flashing beacons at this three-way intersection. The PHB system is a hybrid of a flashing beacon and a traffic signal and is another federally approved MUTCD signal for pedestrian-actuated crosswalk enhancements. The PHB includes a signal face suspended above the roadway that has two red lenses above a single yellow lens. The system remains dark until pedestrian-activated. When activated, the signal flashes yellow, and then a steady yellow, followed by a steady red, and finally alternate flashing red lights. The primary benefit is the requirement for all vehicles to stop for the red light. Vehicles may proceed when the red light is flashing and it is safe to do so. The City installed new signs indicating to motorists how the PHB system lights works. The figure below shows the newly installed signs. 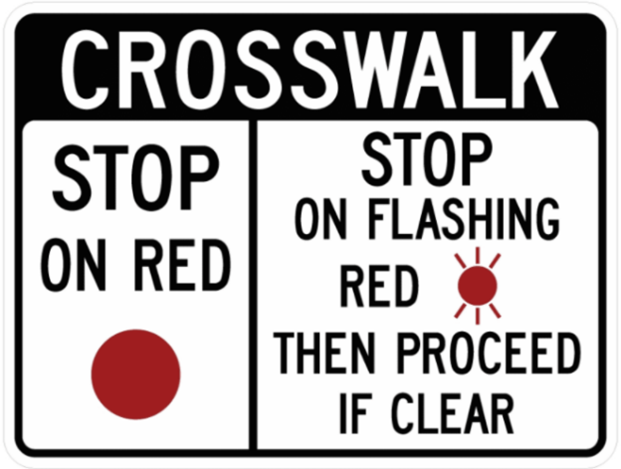 Per the California Department of Motor Vehicles and the California Vehicle Code, a flashing red traffic signal light means “STOP.” After stopping, you may proceed when it is safe to do so, observing the right-of-way rules. Here are some step-by-step instructions showing how to drive through a PHB signal. 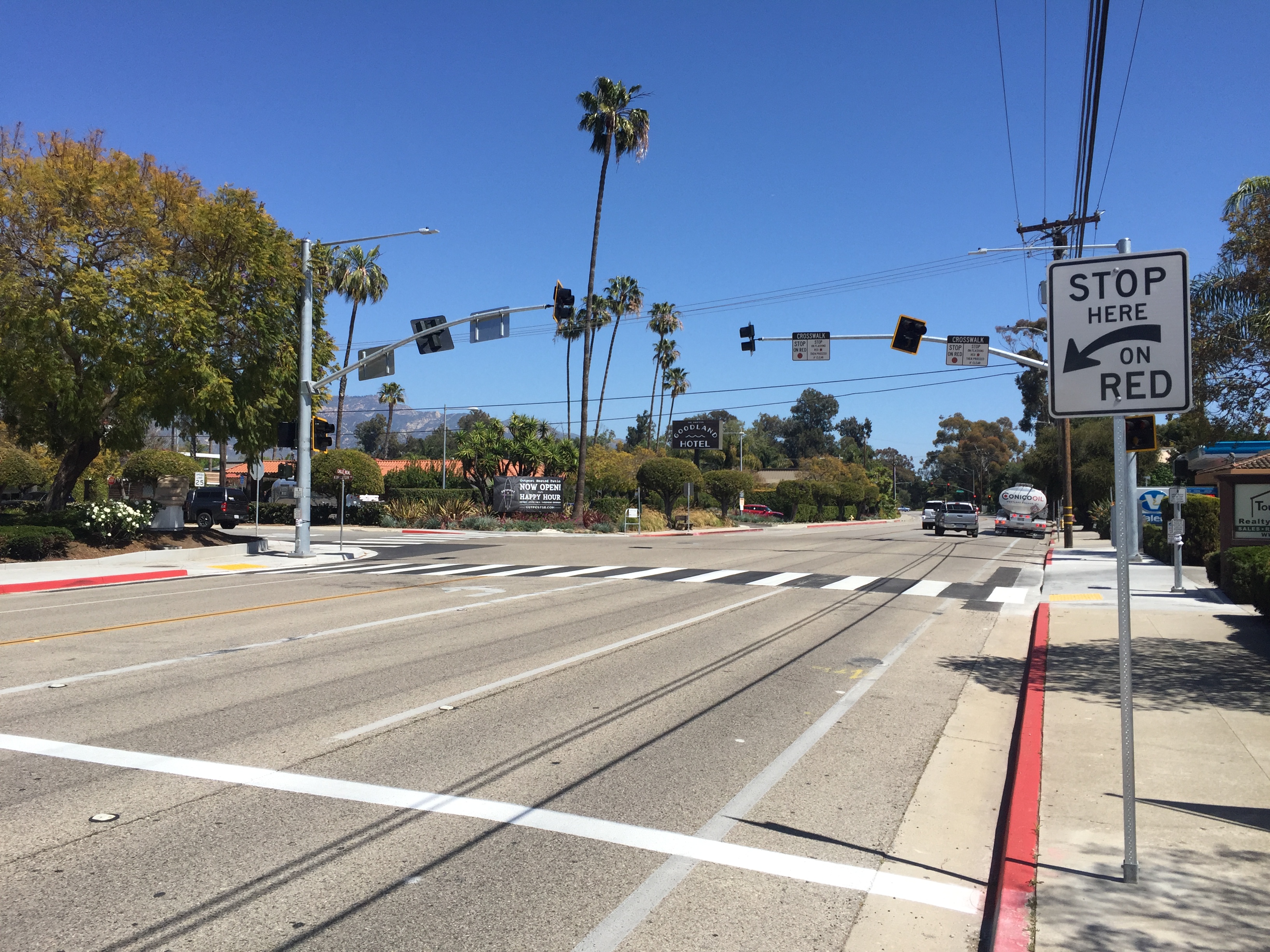 “We are excited the crosswalk improvements are constructed at these two intersections. We submitted and received the HSIP grant based on the safety improvements recommended at these two locations. The pedestrian improvements will benefit all users,” City of Goleta Senior Project Engineer James Winslow said. “The Public Works Department appreciates the community’s initial input during the design phase and their continued patience during construction activities as we implement these crosswalk enhancements.”

The Public Works Department secured a federal Highway Safety Improvement Program (HSIP) grant for $237,780 with additional funding from the local Measure A sales tax for approximately $300,000 and General Fund of approximately $100,000.

Additional project information can be found on our City website at https://tinyurl.com/y427nybt.