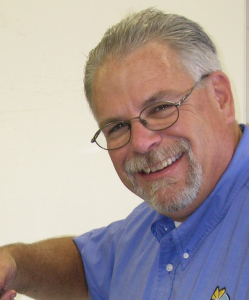 The City of Goleta has lost a dedicated employee and a big personality.  After 16 years of service to the City of Goleta, Building Technician Vance Johnson decided it was time to turn the page.  Vance was with the City almost since its inception.  He was hired to do Code Enforcement in 2004 and in 2007 transitioned to working as a Building Technician.  In 2010 he was hired by Willdan, which provides Building and Safety services to the City under contract, a job he continued to do until his last day on October 1, 2020.

In addition to being an expert in his craft, Vance was also a colorful character with a gregarious personality who was known to bring a smile to the faces of those he encountered.

Director of Planning and Environmental Services, Peter Imhoff said, “For some 16 years, Vance Johnson has been the bedrock of the City’s Building Division and the public face of the City’s building counter. He has helped countless Goleta residents through the building permit process, always friendly and upbeat along the way. We will miss his offbeat humor and steady, reassuring presence.”

City Manager Michelle Greene said, “It’s hard to imagine the City without Vance. He always had a friendly word for everyone he interacted with and managed to make us all smile even on the most difficult days. He was a fixture at our public counter from the beginning, and it won’t be the same without him.”

Besides his institutional knowledge, City Staff will also miss the legendary dishes he cooked up at employee events including his famous Potato Dish!

Vance says he too will miss both the people he worked with and the people he helped during the course of his work. He said, “I loved coming to work every day, Goleta is a special place.  The small-town vibe is my favorite thing about Goleta.”

Vance’s motto he lives by, “Do the right thing, even when no one is watching.”

Thank you, Vance, for all you have done for the City of Goleta.  We wish you the very best in your next chapter of life.