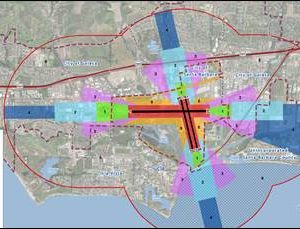 The Airport Land Use Compatibility Plans (ALUCP) designates compatible land uses around public use airports in Santa Barbara County and has an important role in assuring safety around airports. However, the plan in its draft form would have significant impacts on allowable land uses within City of Goleta limits, and would have the practical effect of rendering many existing uses non-conforming to the current General Plan or zoning requirements. In limiting future development potential, the draft ALUCP would also have the effect of displacing growth and planned residential density contemplated by the City’s General Plan to other areas.

On September 19, 2019, the SBCAG Board delayed any action to approve Airport Land Use Compatibility Plans to allow time to resolve some of the outstanding issues.