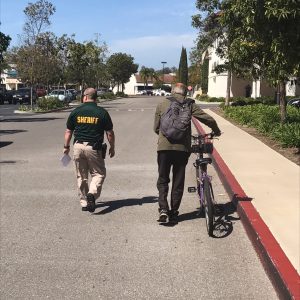 Homelessness is a nationwide problem which affects Goleta as well many other communities throughout California. On a single night in 2017, 553,742 people in the U.S. were experiencing homelessness. 65% were staying in emergency shelters or transitional housing, and 35% were staying in unsheltered locations.

Locally, according to a 2017 report by the Central Coast Collaborative on Homelessness (C3H), there were 99 people living on the streets in Goleta. The Federal government mandates these Point-in-Time counts occur once every other year. The number of homeless persons within Santa Barbara County has remained steady over the past six years, but there have been shifts within the County, including a 111% growth in Goleta from 2013 to 2017. There are several efforts the City is currently doing to address homelessness. Additionally, a team from the City is working with agencies and jurisdictions for a more comprehensive and collaborative approach for this difficult issue and exploring grant opportunities to fund potential new approaches to homelessness.

The City provides financial support to homelessness prevention efforts and services undertaken by nonprofit agencies through Community Development Block Grant (CDBG) funding, City Grant Program funding, and Support to Other Agencies funding representing $137,060 in contributions over the past five years which include the provision of transitional housing at the Salvation Army, emergency shelter during extreme weather conditions at the Freedom Warming Centers, emergency housing for homeless families at Transition House, the Safe Parking Shelter and Rapid Re-Housing Services provided through the New Beginnings Counseling Center, landlord liaison programming to assist people transitioning out of homelessness to rent affordable units, and support to the former Central Coast Collaborative on Homelessness (C3H). Also in 2018, the City provided grant funds to support to the Interfaith Initiative of Santa Barbara County, which provides free showers to the homeless through Showers of Blessing.

Goleta’s Community Resource Deputy (CRD) Dave Valadez is also an important law enforcement asset to addressing issues surrounding homelessness in Goleta. CRD Valadez oversees the Goleta Restorative Policing Program, which connects homeless individuals with the services they need and is a member of the Sheriff’s Office Crisis Intervention Team (CIT) which addresses issues between the homeless and law enforcement. CRD Valadez is coordinating weekly efforts to conduct regular patrols, monitoring and timely clean-up of homeless encampments in response to citizen complaints all over the City. CRD Valadez also partners with other organizations and has started a Business Watch, Creek Watch and Park Watch where residents can contact him directly to let him know about a homeless individual or encampment. Finally, CRD Valadez is also coordinating homeless encampment clean-up efforts with Caltrans, the California Highway Patrol and the Union Pacific Railroad (UPRR) in areas along the 101 Freeway Corridor. CRD Valadez can be contacted directly regarding homelessness issues by sending him an email (dvaladez@cityofgoleta.org), or calling him at work (805-968-3878) or on his cell phone (805-319-9773).